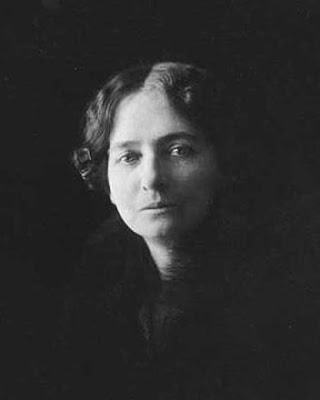 The Australian novelist Mary Grant Bruce (1878–1958) was the second daughter and fourth child of Eyre Lewis Bruce and Mary (Minnie) Atkinson Whittakers, the daughter in turn of William and Louisa Whittakers, Welsh pioneers of the Monaro district of New South Wales. Mr. Bruce was a surveyer who migrated to Victoria from Cork in Ireland in 1854; settled near Sale in East Gippsland ten years later, and surveyed Bruce Road, his only monument, which still skirts the Colquhuon State Forest, commencing at a point on the Princes’ Highway that is roughly half way between Swan Reach and Kalimna West, and leads most of the way north to the neighborhood of Tambo Upper. I am afraid that one day someone will feel they have to pave it.

Now the Bruce, Gooch, and Pearson families of were closely bound by marriage. Two of my great-grandmother Sophie Pearson’s younger Gooch siblings each married a different one of Mary Grant Bruce’s: Frank Gooch married Emily Bruce, while Sophie and Frank’s adored youngest sister Mollie married Maxwell Bruce (Max). After Mollie died in childbirth, leaving Max with a baby daughter, Sophie and William Pearson took the baby into their own family, and raised her with their own son and daughters (including Granny). The baby’s name was also Mollie. Eventually she took the additional surname of Pearson (whether she was ever formally adopted I do not know), and became known affectionately to subsequent generations of Pearsons, Borthwicks, and Trumbles as Mungie.

Now, much earlier, in the 1880s, Sophie Pearson’s sister Kate married William Pearson’s brother Jack, and by this neat and not particularly unusual Victorian stratagem the children of all three families were provided with many cousins; a deep attachment to each other, and a powerful attachment to the region of East Gippsland where they all grew up

Beyond these immediate family connections, like the Pearsons, the Bruces were lifelong friends and neighbors of the Borthwick family of and nearby Bald Hills. In 1914, Mary Grant Bruce married her distant Anglo-Irish cousin, Major George Evans Bruce, to whom in London she introduced the whole Pearson family, including her niece Mungie, who was by then in boarding school.

Throughout the extended periods they spent living abroad, George and Mary Grant Bruce corresponded with great-grandmother Ada Borthwick and, after she died, with Aunt Jean and Aunt Kath. During the bleak period of crisis that followed the death in a shooting accident in Northern Ireland of the Bruces’ younger son Patrick, Mary’s affectionate correspondence with Mrs. Borthwick turned more and more toward breathing exercises, thought-power, table-rapping, and spiritualism. 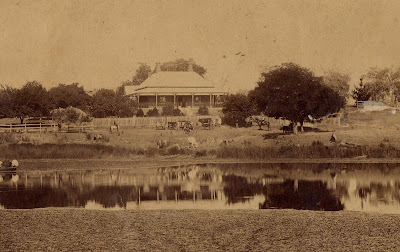 In any case, it is hardly surprising that the Linton characters in Mary Grant Bruce’s famous series of Billabong novels often resemble various Bruces, Gooches, Pearsons, and Borthwicks, and I have a strong feeling that their fictional property, Billabong, is a fusion of Bonegilla (above), Kilmany Park, and Bald Hills, with plenty of embellishments. Here, for example, is the opening of From Billabong to London, the publication of which coincided with the Pearsons’ extended visit to England, beginning in late 1912:

If you came to the homestead of Billabong by the front entrance, you approached a great double gate of wrought iron, which opened stiffly, with protesting creaks, and creaked almost as much at being closed. Then you found yourself in a long, winding avenue, lined with tall pine-trees, beyond which you could catch glimpses, between the trunks of a kind of wilderness-garden, where climbing roses and flowering shrubs and gum-trees and bush plants, and a host of pleasant, friendly, common flowers grew all together in a very delightful fashion. Seeing, however, that you were a visitor by the front entrance, you could not answer the beckonings of the wilderness-garden, but must follow the windings of the avenue, on and on, until the wild growth on either side gave place to spreading lawns and trim flower-beds, the pine-trees ended, and you came round a kind of corner formed by an immense bush of scarlet bougainvillea, and so found the house smiling a welcome.
Very rarely were any doors or windows shut at Billabong. The kindly Australian climate makes the sunlit winter air a delight; and if in summer it is sometimes necessary to shut out heat, and possibly intrusive snakes, as soon as the sun goes down everything is flung wide open to admit the cool evening breeze that comes blowing across the paddocks. Billabong always looked as if it were open to welcome the newcomer.

It was a red house of two storeys, looking lower than it was because of its width and the great trees that grew all round it, as well as because of its broad balconies and verandas. From either side the garden stretched away until hedges of roses blocked the entrance to orchard and vegetable patches. The house stood on a gentle rise, and in front the trees had been thinned so that across the smooth lawn you looked over stretching paddocks, dotted with gum-trees, and broken by the silver gleam of a reed-fringed lagoon. There was no other house visible—only the wide, peaceful paddocks. The nearest road was two miles away, and it was seventeen miles to the nearest town. Perhaps, seen from the front, Billabong might have seemed a little lonely.