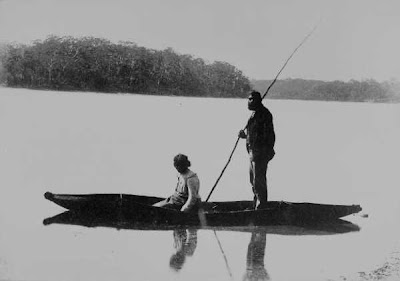 According to his obituary in the Gippsland Mercury, our great-great-grandfather, William Pearson, was “excessively brusque in his general demeanor,” and “had a huge scorn of other men who were given to tergiversation or trickery. Such scorn was expressed in the strongest possible language, and he had much at command, and in his more youthful days was accustomed to back up his opinions by stronger means still.”

No doubt from the vantage point of 1893, fifty years on, nobody cared to remember a regrettable incident which must have taken place not long after September 1843, when Gippsland was proclaimed a separate district of New South Wales, and Charles James Tyers its first Commissioner of Crown Lands—in effect the policeman, magistrate, shire clerk, and the only local representative of the colonial government in Port Phillip.

A sizeable portion of Tyers’s time and energy was spent settling potentially lethal disputes between squatters over boundaries and stray stock.

At a race meeting, William Pearson first horsewhipped and otherwise assaulted a Mr. Desailly (presumably either George or Francis Desailly, the Catholic sons of a Van Diemonian pioneer who was between 1847 and 1853 the owner of Fulham, the station adjoining the northern boundary of Kilmany Park). He then insulted an Irish magistrate, and several other gentlemen, presumably driven to do so on sectarian grounds. According to Don Watson, “Tyers bound him over to keep the peace, remarking that magistrates would not attend races if they were going to be treated like this,” not that this latter point would have in any way bothered William. His squatter friends Robert Turnbull and Angus McMillan paid William’s sureties.

The affair is not recorded in Paul de Serville’s indispensable catalogue of duels, challenges, horsewhippings, and courts of honour in Port Phillip, but it may have been the “affair of honour in Melbourne” which was obliquely reported in the Port Phillip Herald on June 29 and 30, 1846, or else a similarly discreet “horsewhipping” reported on March 2, 1847, in the same place. All of the other published reports named victims and perpetrators who were not William.

More sobering is the reference in the Gippsland Mercury to “the depredations of the wild blacks, with whom he had many a brush.”

Family tradition has conveniently obliterated most if not all pertinent details, no doubt led in that direction by William himself after his marriage in 1859, the birth of his seven children, and his gradual accumulation of public offices, respectability, not to say eminence, and great wealth.

Yet the elder William Pearson certainly took part in the terrible massacres of the Kurnai people of .

To some extent, these looseknit plain-dwelling tribes were already doomed by exotic diseases to which they rapidly fell victim, and there is some evidence to suggest that they were even driven to tear each other apart. But the lawlessness of Gippsland under Tyers exposed all the local Aborigines to ruthless parties of white squatters who systematically gunned them down, assisted by stockmen, a large proportion of whom were either Gaelic-speaking ghillies or escaped convicts from Van Diemen’s Land. It is far from certain whether, even if he had chosen to, William Pearson could have exerted much control over either of these terrifying claques in his service and that of his Scottish friends and neighbours. And we have seen that to Angus McMillan in particular William managed to find himself powerfully indebted, long before he owned the freehold of Kilmany Park or he was rich enough to pay his own sureties. (Actually, it was William’s widowed mother who footed the bill for Kilmany in about 1860; he bought her out slightly later.)

The so-called defense of Angus McMillan’s Bushy Park, and innumerable one-sided skirmishes elsewhere in Gippsland during the 1840s, for which the squatters’ justification was usually some form of legitimate reprisal for thefts of cattle, or fictitious attacks on white settlers (even a few real ones), effectively combined to wipe out most of the Aborigines of East Gippsland within a span of ten years, roughly extending from 1840 to 1850. There was even a remarkably widespread belief, almost certainly generated and sustained by malevolence, that there existed somewhere in Aboriginal captivity a sole white Scottish woman hostage, the only survivor of a shipwreck off the Ninety Mile Beach, whose ghastly fate warranted increasingly brutal reprisals and attempts to “rescue” her. Broadsheet notices addressed to this white woman were printed up and nailed to trees throughout the region. Yet despite the colonial government’s stated determination to protect the natives, and much hand-wringing at Government House, Sydney, nothing was done to restrain the Gippsland squatters. The few surviving Kurnai were permanently humiliated, emasculated, Europeanized, and suppressed into desperate poverty and dependence. Their forests were all cut down.

William Pearson was among the squatters who in the 1840s were careful to maintain careful pressure on the colonial government by reporting from East Gippsland numerous incidents of poaching. Richard Brinsley Sheridan, William O’Dell Raymond’s manager at Strathfieldsaye on the northwest shore of Lake Wellington, complained to Melbourne: “My neighbour, William Pearson, has had ten cattle speared between the Thomson and La Trobe Rivers [i.e. at Kilmany Park].” Yet we do not know exactly where, when, or how William participated in the massacres.

It seems almost certain that from time to time he joined McMillan’s vicious armed posses, and he may therefore have been assisted in the massacre at Butcher’s Creek at Metung, or indeed McMillan’s punitive raid on the mountain tribesmen, which evidently resulted in as many as 200 killings—the weapons of choice were shotguns. Almost certainly William joined McMillan’s self-styled “Highland Brigade,” which carried out the terrible massacre of men, women, and children, in and around the waterhole of Warrigul Creek, not too far south of Sale, from which the only (wounded) survivors were forced to guide McMillan’s men to still more encampments, where further killings took place.

Almost nothing is known about the notorious events of Warrigul Creek, because of a successful conspiracy of silence among the Scottish perpetrators, including Governor Gipps’s awful Protector of Aborigines, George Augustus Robinson, who toured the region shortly afterward, and was careful not to record plentiful evidence of mass murder that he found there. In subsequent decades, as rumors of the crimes and the conspiracy to conceal them from the authorities spread, largely via itinerant clergymen, who professed scarcely to believe them, grisly accumulations of many unburied human bones were discovered in many places, but to add insult to injury the cruelest of calumnies was that these must have been the product of savage intra-tribal warfare among the Kurnai, and not a vicious orgy of reprisal ostensibly unleashed to avenge the murder at Alberton of Donald Macalister, the incompetent nephew of Lachlan Macalister of Boisdale.

The tragic dimension of our family’s direct involvement in the genocide is not merely that Port Phillip blacks themselves were effectively recruited as guides and co-conspirators in the destruction of their own kinsmen, but that, somehow without fully appreciating the supreme historical irony, the tough, doughty Scots who settled East Gippsland visited upon the local Aborigines a fate far more appalling than the one which, during the clearances, the Hanoverians visited upon the Highland clans not eighty years prior.

From this dark chapter in our ancestor’s remarkable history there can be no escape, and it is vital to recognize, understand, and accept the truth concealed behind what the Gippsland Mercury described as “the difficulties incidental to early squatting life.”

The prime minister has on our behalf lately issued an unreserved apology to the Aboriginal peoples of Australia, and, apart from endorsing this heartily and without reservation, perhaps the only thing one can add is some measure of determination that where possible we, William Pearson’s dismayed descendants, shall face up to the appalling truth about his excessively brusque demeanor, to the farthest extremity of which the blameless Kurnai of Gippsland were so shamefully exposed. Requiescant in pace.