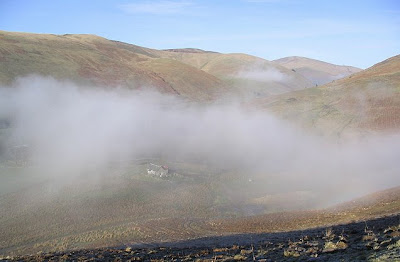 According to the meticulous notes left to us by our great-great-grandfather, Alexander Hay Borthwick, his forebear, William Borthwick of Glendinning, married in 1701 a Miss Janet Scott of Merrylaw.

His son and namesake took over that farm, and married a Miss Elliot of Borthwickbrae, near Hawick in the same Dumfriesshire border country with which the family had been closely connected since the fifteenth century.

After a ruinous stock sale of 1753, Mr. and Mrs. William Borthwick retired to the coastal town of Irvine in North Ayrshire, where, in somewhat reduced circumstances, he practiced, it is said, as a “tide waiter” or coastal customs inspector.

Of their three daughters and two sons, the eldest, another William, joined the British army, attained the rank of Lieutenant-Colonel, and was present with his own son, inevitably also William, at the Great Siege of Gibraltar in 1782–83. This younger William prospered in the army, became a general, and went on to assume senior commands in the Peninsular War. Major-General William Borthwick was wounded in the Siege of Cuidad Rodrigo, and died in comfortable retirement at Cheltenham.

However, it is Thomas, the second son of William and Janet Borthwick of Glendinning, that concerns us here. “In 1732 Thomas Borthwick took the farm of Shaws in the Parish of Yarrow (Ettrick to be correct). He got Langshawburn [Glenkerry, Dumfries and Galloway] in 1760, after his elder brother failed in Cassock, as a led farm [i.e. he lived elsewhere]. He also held land in England. He left Shaws in 1783, and for one year he lived at Langshawburn and then came to Sorbie in the Parish of Ewes, where he died in December 1793, aged 85 years.”
Thomas Borthwick married a Miss Jean Elliot of Borthwickbrae—who was in fact the niece of his own brother William’s wife (her brother’s daughter).

Undeterred by the immense confusion arising from so many Williams, Thomas and Jean Borthwick decided to name their eldest son William also. Aged only forty-two, this William died in Edinburgh in 1792, a year before his father. He married Elizabeth, the only daughter of Alexander Hay, Portioner of Inveresk, and a Burgess of the City of Edinburgh.
Upon his grandfather’s death, our great-great-great-grandfather, Alexander Hay Borthwick, the eldest son of William Borthwick and Elizabeth Hay, inherited the farms of Sorbie and Langshawburn, and scooped up his younger brother Walter’s property called Hopsprig farm, as well as Meikledale, Mosspeeble (above), and Lodgegill. He married Agnes, the eldest daughter of Thomas Chalmers, and died at Hopsprig on February 16, 1837.

In a curious twist, Alexander Hay Borthwick was for a period factor to Sir Frederick Johnstone, Bart., of Westerhall, a descendant of the doughty Lady Johnstone who tried her best to confiscate our crafty Borthwick ancestor’s sheep.

As a young man, Alexander Hay Borthwick’s fourth son and namesake was factor to the fifth Earl of Hopetoun at Queensferry. After his father’s death in 1837 he farmed Mosspeeble and Lodgegill until 1866, when he retired, went to live at Melrose, and drafted his family’s proud but curious border history, presumably for the benefit of his son, our pioneering great-grandfather William Borthwick of Bald Hills at Fulham, near Sale in East Gippsland.
Posted by Angus Trumble at 3:50 PM