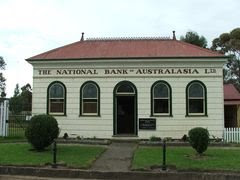 My great-great grandfather, William Borthwick, was born near Borthwick Castle in Midlothian, not far from Edinburgh, and was certainly a distant kinsman of the sixteenth, seventeenth, and, I suppose, on that principle, all subsequent Lords Borthwick in the peerage of Scotland, who are also chiefs of the Clan Borthwick, Barons of Heriotmuir, and Lairds of Crookston. His wife’s maiden name was Jane Murray.

Their son, my great-grandfather, also William Borthwick, was born on December 4, 1850, and emigrated on his own aboard the S.S. Ravenscraig, the ship which presently brought the first ukulele from Madeira to Honolulu in 1879. William Borthwick arrived at Port Melbourne in July 1870, aged nineteen and a half.

William joined the National Bank of Australasia Limited in , and rose rapidly; in fact he did so well that before long he became the youngest man ever appointed manager, in this case the Bank’s branch at Maffra in (above).

There he met his future wife, Ada Maud Mary, the daughter of Edward Connor Bell and Katherine Anne Wallen.

According to Aunt Anne, on the first occasion upon which William set eyes on , she was kicking a football in the grounds of the local branch of a rival bank, of which her uncle was manager.

Somewhat weakly, despite his middle name, E. C. Bell always insisted that his father, a Writer to the Signet in Dublin, was Scottish, not Irish, on the unfortunate, oft-repeated basis that “Had I been born in China, I would not have been Chinese.”

After ten years at the National Bank, William Borthwick bought into Mr. Little’s stock and station agency in Sale—which duly became known as Little and Borthwick.

According to a useful advertisement placed in The Gippsland Mercury (1898), Little and Borthwick (late English, Little, & Co.) were the local agents for the Land Mortgage Bank; the Curator of the Estates of Deceased Persons; the Peninsula and Oriental Steam Navigation Company (P. & O.); Messrs. R. Goldsbrough, Woolbrokers, and the Liverpool and London and Globe Fire and Life Insurance Company, in other words practically everything.

They also conducted auctions and carried out valuations “in any part of Gippsland,” and lent “large and small sums of money” on mortgage or freehold estate, in effect behaving very much like a bank.

In 1885, with the proceeds of this rather successful business William purchased a property four miles west of , across the road from the Pearsons’ Kilmany Park. William Borthwick named it Bald Hills, presumably after the eponymous Bolkonsky estate in Tolstoy’s War and Peace, which first appeared in English translation in the same year. The land is west of Fulham, near where the aerodrome now is.

As neighbors with strong Scottish connections, the Borthwick and Pearson families grew up in close proximity and while the Borthwicks were not nearly so rich as the Pearsons, they were evidently prosperous enough to enable Aunt Jean and Aunt Kath and possibly their mother also to travel to Europe for an extended holiday in the 1920s, presumably after great-grandfather William Borthwick died, and again in the mid-1930s.

On that later occasion they traveled aboard an Imperial Airways Short “C” Class flying boat, a 16-day journey which induced temporary deafness but offered by way of compensation nightly hotel accommodation somewhere pleasant, and conversation-free dinners.

Posted by Angus Trumble at 3:37 PM