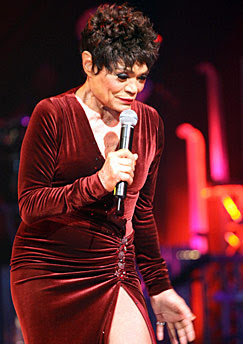 Before Christmas, Martha “Sunny” Sharp Crawford von Auersperg von Bülow, so named for her bright disposition, died in her suite at the Mary Manning Walsh Nursing Home on York Avenue at 72 Street, after twenty-seven years, eleven months, fifteen days, and an undocumented number of minutes in which she was marooned in “a persistent vegetative state.”

Last Monday, whilst carrying out an errand for my brother at Sotheby’s, the nice woman at the front desk in jewelry, who has an unobstructed view of the Mary Manning Walsh Home directly opposite, told me that Sunny von Bülow occupied the whole of the two top floors. I am not sure how she came by this information, but in the allocation of that much space surely represents an unusually awesome weekly outlay.

“Do you think he did it?” asked the woman at Sotheby’s, with a look.

No sooner had I successfully navigated in respect of Sunny the five stages of the grieving process per Elisabeth Kübler-Ross than news of the death from cancer on Christmas Day of Eartha Kitt appeared in the New York Times.

For Sunny, I knocked over denial, anger, bargaining, and depression in a record number of shopping days, arriving at acceptance, and achieving closure, over cocktails a week last Saturday. With Eartha the process will not, I think, be so straightforward.

Miss Kitt was a star, a great big star, shining gamely in the firmament of the greatest and brightest of all stars of stage, screen, and cabaret.

She was 81, had worked non-stop for more than 60 years, spoke four languages fluently, and until recently was regularly playing the intimate Café Carlyle, at 35 East 76th Street and Madison.

How I wish, wish, wish I had made a better effort to see her there.

Soon after I went to work at Government House, Melbourne, in the hot, late summer of 1988, I made a cold call to the old Southern Cross Hotel, somehow guessing correctly that this would be where Miss Kitt was staying during her brief return visit to .

Amazingly, the telephonist put me straight through, and at length Miss Kitt picked up the phone, and, after an exquisitely timed pause, she acknowledged me with a superb, gravelly “Hello?”

Demonstrating the audacity of a young, dangerously inexperienced, still “closeted,” yet even by then fully paid-up, card-carrying, foppish queenlet, aged twenty-three, with distinctly star-fucking tendencies, I explained as brightly as possible who I was, and without hesitation invited Miss Kitt to join me for cocktails at Government House, if she had a spare moment, there being very little else going on, because Dr. and Mrs. McCaughey were still away, spending the tail end of their summer holidays at Walkerville, near Wilson’s Promontory.

To my stupefaction, which deepens with the passage of each subsequent year, and with rare charm, Miss Kitt actually accepted my invitation.

At the appointed hour, unexpectedly accompanied by that self-appointed bard of Brunswick Street, the “poet” and awful old fishwife Adrian Rawlins, Miss Kitt strolled languorously up the gravel drive of Government House, and, together with Tom Hazell, A.O., sometime Deputy Official Secretary to the Governor, who, for reasons that are still unfathomable, not merely coöperated with, but aided and abetted this odd scheme, I met Miss Kitt at the State Entrance, and took her on a guided tour.

The ballroom at Government House is truly impressive, the most Neronian gesture in a great house which, since the 1870s, has trumpeted the colossal wealth and even greater pride of colonial . Its very raison d’être was to enable Melburnians to claim ad nauseam, and to anyone who may care to listen, that this ballroom is longer, broader, higher, and more magnificently decorated than the one in Buckingham Palace.

I do wonder if that is true; certainly, however, they run neck and neck. 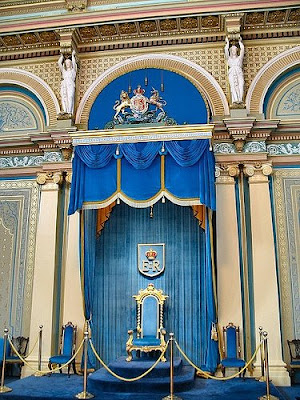 At one end is this canopy and dais on which stands the governor’s gilded chair, sporting the gubernatorial badge of office, the Crown of St. Edward.

Without hesitation, and with perfect bearing, gait, insouciance, and, at the same time, total authority, Miss Kitt glided up the steps, sank into the chair, and, leaning comfortably to one side, crossed her legs, and continued our easy conversation from that position, only relinquishing it after a lengthy stay, when she was quite ready.

Afterwards we retired to the Governor’s small private drawing-room for a gin-and-tonic.

At the end of her hour-and-a-half visit, when the time came to say goodbye, Miss Kitt kissed me on both cheeks, and told me to be sure and come and find her. If she wasn’t at home in , she’d be in , or else at her house in . Why I never took up this kind invitation I cannot say, because I am absolutely sure it was genuine.

Not long afterwards, Lawrence Money, an old hack on the Herald, who had, and, for all I know, still has, a nose for bits of relatively harmless gossip, presumably in this instance proffered by Adrian Rawlins, rang me in the office, and asked point blank if it was true that I had upon my own responsibility entertained to drinks at Government House the great cabaret star Eartha Kitt.

This was my first, and hitherto entirely untutored experience of dealing with any sort of inquiry from a representative of the media, so, inevitably, I suppose, the entire transcript of my desperate, panic-stricken, and cringe-making telephone conversation was printed in Lawrence’s column, of which the most ridiculously evasive locution, as futile as it was mendacious, was “I don’t understand the level of your inquiry.”

To their credit neither Davis McCaughey nor Charlie Curwen ever mentioned this awful indiscretion, even though I am sure they laughed and laughed about it. By contrast, a few good old friends, led by the estimable David J. O’Callaghan, Q.C., rarely fail to mention, indeed deploy it.

Last Friday’s obituary, and the extended appreciation by Allan Kozinn on the front page of the Arts Section in Saturday’s New York Times, brought home the full measure of genuine hardship Eartha Mae Keith endured throughout her remarkable life, commencing at the moment of her conception by rape in .

Miss Kitt should never have been subjected to the abuse of their powers by the F.B.I. and the C.I.A., who, under the administration of President Lyndon B. Johnson, wasted much public money by trying to gather into the relevant files grossly stupid tittle-tattle, in a sinister, surprisingly effective, but fortunately short-lived effort to destroy her career; long enough, however, to do Miss Kitt much damage.

This cowardly whispering campaign was mounted because, whilst visiting the White House, Eartha Kitt made the mistake of telling Lady Bird Johnson exactly what she thought of the Vietnam War, and evidently the President thought it worth taking some action, however inappropriate, and, incidentally, illegal.

A few days ago in Starbuck’s I ran into my friend Stan Fivekiller, a Yale alumnus, veteran Whiffenpoof, and fellow homosexualist. At length we chatted ruefully about Eartha.

In an amusing exchange of anecdotes—after all, it’s not, or oughtn’t to be, a competition—it turns out that Stan once lunched with Eartha Kitt, at the old Les Halles at 411 Park Avenue South, between 28th and 29th Streets—still going strong. Stan’s lunch date was arranged by a mutual friend who designed and maintained Miss Kitt’s wigs when she played the Wicked Witch of the West in the New Century Opera Company’s 1998 touring revival of The Wizard of Oz.

After lunch, which was healthy and abstemious, Miss Kitt, who was 71 or 72, put on her trainers, set off north along , and power-walked, alone, all the way up to the Carlyle, a distance of forty-seven blocks.

There never was, and there never will be another star like her. Zikhronah livrakha זיכרונה לברכה May her memory be for blessing.

Posted by Angus Trumble at 1:07 PM