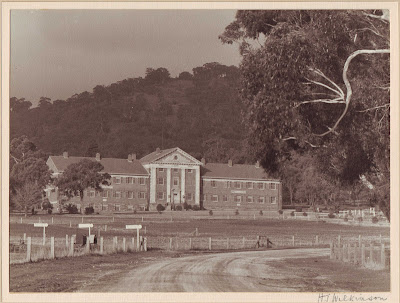 Professor Hugh Christian Trumble was the son of my great-grandfather’s brother, the famous Test cricketer Hugh Trumble.
Professor Trumble was appointed to the Waite Agricultural Research Institute at the University of Adelaide in 1925, and became professorial head of the Department of Agronomy from 1941 to 1953.

His papers are still there, and include memoranda and reports which are numbered, some with index cards for ready reference. There is also a notebook of experiments for the season of 1933, two annual diaries, and a notebook of pasture and cereal experiments. There are also some handwritten lecture notes on agrostology, i.e. the scientific study of grass.

Professor Trumble was the author and co-author of a number of learned papers, books, and reports about Australian agronomy.
The earliest of these was a brief tract he wrote with Arnold Edwin Victor Richardson and R. E. Shapter, which cheekily they entitled Factors Affecting the Mineral Content of Pastures, with Particular Reference to the Environmental Conditions Incidental to Southern Australia…Report on Co-Operative Investigations at the Waite Agricultural Research Institute (Melbourne: H. J. Green, government printer, 1931).

This was followed in 1932 by the same authors’ The Influence of Growth Stage and Frequency of Cutting on the Yield and Composition of Perennial Grass, Phalaris tuberose (Melbourne: H. J. Green, government printer, 1932).

Investigations on the Associated Growth of Herbage Plants; Progress Report on Co-Operative Investigations at the Waite Agricultural Research Institute (Melbourne : H. J. Green, government printer), duly followed in 1937, and, in the following year, The Relation of Phosphate to the Development of Seeded Pasture on a Podsolised Sand, (Melbourne : H. J. Green, government printer, 1938).

(Podzolic soils, as they are now known, are grey, ashy, and although characteristically capped with an abundant surface accumulation of organic matter, are often severely leached, highly acid, and generally low in agricultural value.)

Also in 1938, Professor Trumble wrote for the Council for Scientific and Industrial Research The Establishment of Pasture on Deep Sands in the Upper South-East of South Australia. A Report on Co-Operative Investigations at the Waite Agricultural Research Institute (Melbourne: H. J. Green, government printer, 1938).

Finally, the Waite Institute having in the meantime been much depleted by the demands of World War II, Trumble published with Robert Langdon Crocker, Investigations of Guayule (Parthenium argentatum Gray) in South Australia (Melbourne: H. E. Daw, government printer, 1945).

Hugh Christian Trumble is not to be confused with my grandfather’s brother, also Hugh, the eminent brain specialist and neurosurgeon, whose 301-page volume of Collected Papers was edited by his brother-in-law Leonard B. Cox, R. S. Lawson, and T. E. Lowe, and published with a foreword by W. G. D. Upjohn (Melbourne: The Alfred Hospital, 1957).
Posted by Angus Trumble at 2:36 PM