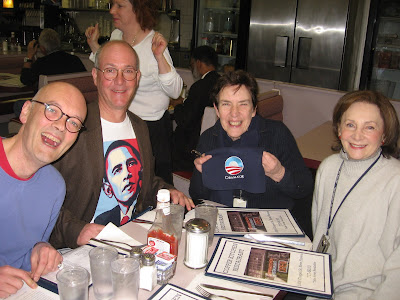 Some weeks, propelled by routine, seem to fly past. Others are so packed with incident that the memory of seven days ago feels like a different era. This was one such week.

Last Saturday I took the train to , and stayed with my friends David and Doug in their charming house just off . The train was packed with excited families heading to for the Inauguration, and even Mayor DeStefano was there, with mountains of luggage, presumably proceeding to the capital in his official capacity.

The President-elect departed Station about thirty minutes before we arrived, by which time the crowds had scattered and the surrounding streets were eerily vacant.

On Sunday morning I went with Doug to divine worship at the supremely dignified St. Peter’s Episcopal Church, rather “low,” where the custom is at first to face west, then half way through, after the intercessions, to turn and face in the other direction for the rest of the service. Enclosed pew stalls, arranged between three broad aisles, are appropriately furnished with carriage-car seating to facilitate this deft maneuver.

The two wedding-cake pulpits and the organ case opposite are as grand as can be, and interior so bracketed is the ne plus ultra of American colonial church architecture, plain and crisp and white, with exquisitely classical proportions.

In the detached Christ Church churchyard, hard by the mint, David took me to see the surprisingly modest grave of Benjamin Franklin, who founded pretty much everything in Philadelphia, and his “wife”—in fact they never formally married—and afterwards, as the temperature plummeted, I purchased an extremely becoming hat from a rug dealer in 2nd Street. I came back to New Haven through a sort of blizzard, very Anna Karenina.

After a brief pause for reflection on Martin Luther King, Jr. Day, then came the Inauguration.

I think I shall always remember that day. It was simply brilliant, a wonderful experience. We had the ceremony streaming live in our lecture theater, and it was packed with jubilant staff, students, and visitors, wild applause, never wilder than when they ran those hapless Bushes out of Dodge.

Vice-President Cheney’s Dr. Strangelove impersonation was too beautiful. Did he specifically request the creepy guy hat? Gone, gone, gone, and gone for good.

I have to say that the Reverend Dr. Joseph Lowery upstaged everybody. You need to hear him right to the very end: http://www.youtube.com/watch?v=7pEH37JIgBU.

Another big highlight for me was Aretha Franklin’s enchanting hat, and grey knitted gloves. I am reliably informed that those are real diamonds: http://www.youtube.com/watch?v=2gXZCvEC9U0

C-minus to Chief Justice John G. Roberts, Jr., for bungling the presidential oath so badly that he had to administer it again the day before yesterday. Evidently he presumed he could dictate it from memory in front of at least two million people—wrong! It was an appalling error of judgment not to arm himself with a piece of paper upon which are written the correct words, and I doubt if his reputation will ever fully recover.

Afterwards a group of us went to have a celebratory lunch—the all new Obama chilli burgers at the Copper Kitchen—and we have vowed to make this an annual occurrence.

Left to right: self; Mark Aronson, Chief Conservator of Paintings at the for British Art; Suzanne Boorsch, Robert L. Solley Curator of Prints, Drawings, and Photographs at the , and Helen A. Cooper, Holcombe T. Green Curator of American Paintings and Sculpture at the .

Mark, Helen, and I co-curated “Benjamin West and the Venetian Secret,” and Helen is patiently waiting to hear if she will continue to serve on the White House Preservation Committee. I hope they keep her.

No doubt we look a bit like the crowd before Jesus performed some type of miracle, but the mood was one of great elation, and high hopes. I challenge anyone to see the Obamas’ first dance at the Neighborhood ball, and not shed a tear: http://www.youtube.com/watch?v=LujYtA-qJgo

Posted by Angus Trumble at 7:29 AM