The Bird of Paradise 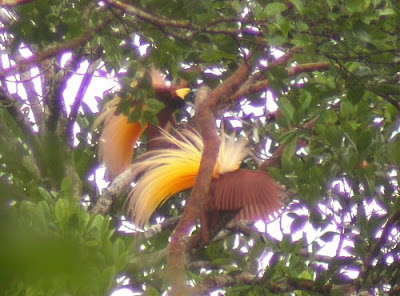 Thus far I have led a remarkable life, full of adventure and excitement. Long may it continue.

Yet as I get older, and slower, some childhood memories not only gain in vividness, but, from the vantage point of my study window on the sixteenth floor of the in , also seem literally incredible.

Not long ago, whilst leafing through an auction catalog with my director, Amy Meyers, and our brilliant paintings conservator, Mark Aronson, we came upon a watercolor illustration of a splendid bird of paradise, and I remarked, as casually as possible, that many years ago, thirty in fact, I had actually seen a real one, and would never forget the experience.

Mark, who as well as being a highly skilled conservator and connoisseur of Latin American dancing is also a dedicated twitcher, knew what I meant.

But, quick as a flash, dear Amy said, yes, they have a great collection of specimens in the .

That wasn’t really what I had in mind.

In 1979, Mum and Dad sent me, not yet fifteen, on a expedition to . It was a rare oasis in the midst of an otherwise grim few years of misery at the senior school, before (thank God) I was rescued by Alan Eustace, Geoff Smith, Betty Elliott, and the art department.

We traveled under the kindly aegis of the Church of England, whose local bishop, a portly, pink, snowy-haired Englishman, entertained us for tea in his palace garden in .

We flew from there to Alotau at the eastern end of the island, in an ancient corroding DC3 aircraft, and, after a short boat trip across the bay, walked thence to the church community of Dogura, on the north coast.

It was a relatively easy day’s walk, but the path, such as it was, took our little party over what are amusingly described as “hills,” but better resemble precipitous mountains covered in dense jungle.

In fact the region is the farthest extremity of the , which, in a neat twist, were named after the pioneering son of a Victorian Bishop of .

About half way across, in a little clearing hard by the summit of a hill almost entirely shrouded in steaming vapor, surrounded by jungle noises, strange squarks and snufflings, we saw it, on the upper branch of a big, scrubby mango tree: a lone bird of paradise, performing like a consummate professional, with his astonishing repertoire of brightly-colored Vegas-level plumage.

He trembled and shivered, swayed and shimmied, bounced and flounced, riffled, shook, dangled upside down, and, I presume, called in vain for his mate.

We stood there motionless, wholly transfixed, for a few long, long minutes, before he threw in the towel, and vanished.

I am not sure I have seen anything as beautiful as that chipper bird of paradise in the hills above Dogura, and I doubt if I ever shall.

Posted by Angus Trumble at 7:38 AM