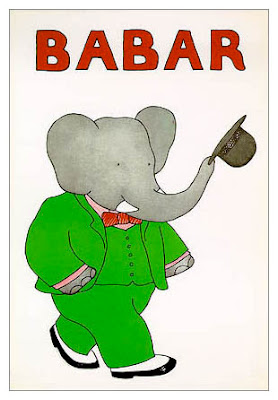 Who can question the restorative power of a brief visit to the between Christmas and New Year’s, even in this period of economic catastrophe?

No doubt cleverer, higher-minded, more serious colleagues will scoff, nevertheless I shout it from the rooftops: The art exhibition of the season, if not the year, is Drawing Babar: Early Drafts and Watercolors at what they now call—pace J. Pierpont Morgan (1837–1913)—The Morgan Library and Museum.

Jean de Brunhoff died of tuberculosis in 1937, aged 37, but one of his three sons, Laurent, took up the family franchise in the mid-1940s.

Laurent is still alive, and has half-sold, half-given everything, everything to the Morgan. This exhibition is curator Christine Nelson’s brilliantly chosen selection, three thoroughly digestible rooms only—the Morgan Stanley Galleries East and West, and the intervening Marble Hall, just off Renzo Piano’s chilly JPMorgan Chase Lobby, to the right as you enter—and appropriately deft but light on the inevitable post-colonial themes.

Happy, uncomplicated laughter, and gasps of pleasure are a rarity in American art museums, but the refreshingly thin crowd at the Morgan last Sunday was, like me, wholly transported.

I did not recall the walk-on appearance, if that is the right word, of an ecstatic mob of kangaroos in Babar et ce coquin d’Arthur, Laurent de Brunhoff’s first volume (1946). There they are, on pages 20–21, waiting to greet little Arthur as he drifts down in his parachute, dressed in the smart red-and-white sailor’s outfit, including an undisturbed red pom-pom on the top of his hat.

I shall have more to say in due course about ces drôles de bêtes, but I wonder how the younger De Brunhoff alighted upon our national animal, here so very well drawn, and from such fiendish angles. Perhaps, along with the giraffes, these wholly charming vignettes seemed as far away as possible from the painfully recent recollection of , and occupied . 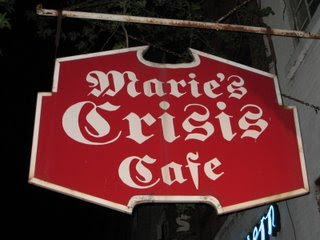 I am sounding middle-aged, which I am, but the particular joy of wandering around New York is discovering places that, against all odds, manage to be still there since you were there last time, never mind still going strong after decades.

Marie’s Crisis is a tiny basement piano bar at 59 Grove Street in .

During Prohibition it was a genuine speakeasy, and as such it brings to mind the brilliant exchange between the hardened Broadway legend, Helen Sinclair, and the ambitious young writer David Shayne (played by Dianne Wiest and John Cusack) in Woody Allen’s Bullets Over Broadway (1994), when, after rehearsals, the actress and her playwright retreat to a speakeasy, and Miss Sinclair orders from the bartender two martinis, please, very dry.

“How’d you know what I drink?” says David, to which Miss Sinclair replies sidelong, in a gag that is as old as it is good, “Oh, you want one too?”

Scarcely anything has changed at Marie’s Crisis since the Depression, including the mural behind the formidably narrow, but well-stocked bar.

Here, gay veterans of multi-generational Broadway choruses, superannuated ushers, clusters of gigglesome friends, or merely the would-be star-struck, together with the usual assortment of dubious hustlers, a scattering of harmless drunks, sundry cads, and thrilled sightseers from , forgather late at night for cocktails and to sing show tunes, lustily and well. I adore it.

Suitably warmed to the cockles, and after stopping in at Boots and Saddle for old time’s sake (about which more presently), I wander home through empty streets to Andrew’s rectory—“the city that never sleeps” is one of the more preposterous myths of New York—not before contemplating a small mystery arising from this, the most rational conurbation the world has ever known.

“The Bronx is up and the Battery’s down,” runs that memorable line in “New York, New York,” the hit number from On The Town, which, if I were to allow myself a momentary lapse into Broadway snobbisme, premiered on December 28, 1944, at the fine old 1,434-seat Adelphi Theater, formerly at 152 West 54th Street between 6th and 7th Avenues (closer to 7th)—book and lyrics by Betty Comden and Adolph Green, music by Leonard Bernstein, and choreography by Jerome Robbins—and closed on February 2, 1946, after 462 performances.

The wry regulars at Marie’s Crisis know full well that those helpful words of orientation first issued from the lips of John Battles, who created the role of Gabey, and not Gene Kelly, who starred in the 1949 Metro-Goldwyn-Mayer Hollywood motion picture musical.

But that is neither here nor there.

If, with perfect logic, Manhattan cross streets run east–west and west–east starting at 1 and rising in serried ranks to 155, and the broad avenues carve the whole into manageable north–south rashers beginning at 1, actually York, well, “A” really, through 3rd, 5th, 7th, 9th, etc., to 12th by the Hudson—thereby making the very concept of a New York street directory completely moribund—then how was it possible for the city fathers to permit this, the most baffling and counter-intuitive of all Manhattan intersections?

Just off 7th Avenue, West 4th and West 10th Street cross each other at right angles.

People will carry on about how is a shadow of its former self. And it is true that AIDS plowed a canyon of destruction through the heart of it. But it takes more than a nightmare pandemic to dampen the spirit of your average homosexual. New generations are pouring into town, and renewing it.

Apropos: After Marie’s Crisis, a blissfully funny moment whilst reminiscing with some gay old-timers in Boots and Saddle, a grubby cowboy joint, or, as they describe themselves, “The Manly Gay Saloon Bar,” just around the corner at 76 Christopher Street and Seventh Avenue, liberally festooned with saddlery that has never so much as come within twenty miles of a horse.

When, inevitably, at length the D.J., such as he was, played “Macho Man,” the 1978 Village People disco hit by Jacques Morali (R.I.P.), Henri Belolo, Victor Willis and Peter Whitehead, from deep within a blissful cloud of unknowing, one of the current bartenders, a buffed twelve-year-old Latino with a heart of gold, full-throatedly started to sing along:

“Nacho, Nacho Man!” he chirruped, wiggling his not unattractive hips. “Every man ought to be a Nacho Nacho man / to live a life of freedom, Nachos make a stand…”

Posted by Angus Trumble at 9:34 AM