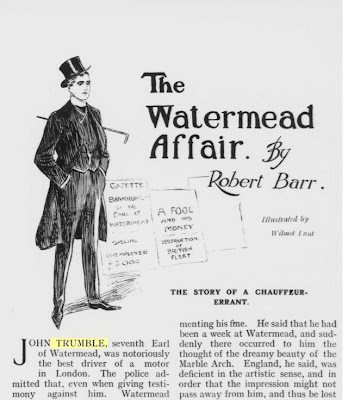 Charles de Cresseron’s peculiar historical novel The House By the Church-Yard—A Souvenir of Chapelizod was serialized in the Dublin University Magazine in 1862. In the middle of chapter XLVIII (Vol. 59, No. 353, May, p. 572), after Captain Cluffe goes missing, presumed drowned whilst attempting to punt across the river, upstream from the salmon leap, under cover of darkness, his breathless, lisping companion Lieutenant Puddock raises the alarm, and bursts into the clubrooms of the Phoenix:

There were assembled old Arthur Slowe, Tom Trimmer from Lucan, old Trumble, Jack Collop, Colonel Stafford, and half-a-dozen more members, including some of the
officers—O’Flaherty among the number, a little “flashy with liquor,” as the phrase then was. Puddock stood in the wide opened door, with the handle in his hand. He was disheveled, soused with water, bespattered with mud, his round face very pale, and he fixed a wild stare on the company…

“Cluffe?” “Drowned?” “By Jupiter!” “You don’t say so?” and a round of such ejaculations followed this announcement.

Old Trumble seems not to have risen above the picturesque cast of supernumerary Anglo-Irish clubmen extras in this admittedly exciting tale.

An extended advertisement placed by Cassell, Petter, Galpin & Co. in the Magazine of Art of January 1880, listing “Books for Children and Young People,” meanwhile, was led on page 484 by “Tim Trumble’s ‘Little Mother,’ A New and Original Story. By C. L. Matéaux, Author of Home Chat, &c. With 18 Illustrations by Giacomelli. Fcap, 4to, cloth, gilt edges, 5s.” According to the critic of the Academy (No. 18, July/December 1880, p. 421) this work

is an odd mixture, and is certainly above the comprehension of little folk, though perhaps tolerably big boys and girls may find amusement and pleasure in its pages. “Little Mother,” it would seem is a pet name for Tim Trumble’s motherly daughter, while Tim was a circus-man who revisits the country. Interwoven with the main story is a record of the family life and history of a nest of little finches, who have taken up their abode near Tim Trumble’s country home. A large portion of the book deals with bird-life generally, the views of birds with regard to mortals, &c.

And in “The Watermead Affair: The Story of a Chauffeur-Errant,” by the Scottish-Canadian adventure story writer and historical novelist Robert Barr, which appeared in October 1905 in his own journal The Idler (p. 434), co-edited with Jerome K. Jerome,

John Trumble, seventh Earl of Watermead [above], was notoriously the best driver of a motor in London. The police admitted that, even when giving testimony against him. Watermead Manor is not much more than sixty miles from London, but when the young man did the distance from his park gates to the Marble Arch in fifty-six minutes on his new Brusier-Grolier, a machine of the same make which, to the eternal glory of France, had won the Gordon-Bennett Cup that year, the bench of magistrates universally agreed that his lordship had not only gone too far, but too fast.

The excuse which he gave the bench on this occasion came near to augmenting his fine. He said that he had been a week at Watermead, and suddenly there occurred to him the thought of the dreamy beauty of the Marble Arch. England, he said, was deficient in the artistic sense, and in order that the impression might not pass away from him, and thus be lost for ever, he leaped upon his motor, and came as quickly as he could to view the Marble Arch by moonlight; and his lordship assured the bench, almost with tears in his eyes, that the sight of the grimy marble had filled his mind with poetic thought, which should be encouraged in these days of commercialism. The senior magistrate drily remarked that his position compelled to take the commercial, rather than the poetic, view of his lordship’s action, whereupon he fined him a sum about as near to the maximum as he could get without actually reaching it.

Yet it was but two days later that his lordship gave the Pullman express from Brighton three minutes’ start, overtook it, passed it, and would have beaten it into London had not the authorities, warned by telegraph, placed a barrier across the road south of Croydon, although they allowed the express to pass through, which Lord Watermead held was unfair treatment. He accused the express of furious loitering, to the exasperation of all passengers, and held that he should be commended for consenting to teach that train its duty. Instead of approval he received censure, and was mulcted a fine as heavy as the law allowed. He always referred to this race with the Brighton express as a delightful leisurely episode in an otherwise fast life, and claimed with pride that there had then been applied to him, for the first time in England, the term “Road-hog.”

The story is salutary, because through extravagance and financial prodigality John Trumble, seventh Earl of Watermead, loses everything, his London townhouse, his estate, his possessions, his servants, and his motors. People cut him at his club. Through an ingenious series of twists, however, he finds employment as a chauffeur, incognito; meets and falls in love with Miss Erroll, thrills his future father-in-law, a doctor, by contriving to acquire for and drive him with supreme caution in the finest of his lost Brusier-Grolier motors, and, finally, beats Sir William Dillow, baronet, in a crucial road race to save his Watermead estate.

Kate Erroll had raised her veil, and was looking intently at the chauffeur.

“It means, my dear, that John Trumble, Seventh Earl of Watermead, has still enough influence here to order tea for his friends. It means that to-day we are taking nobody’s dust. It means that Watermead House hopes to please the future Countess.”

Posted by Angus Trumble at 3:55 PM