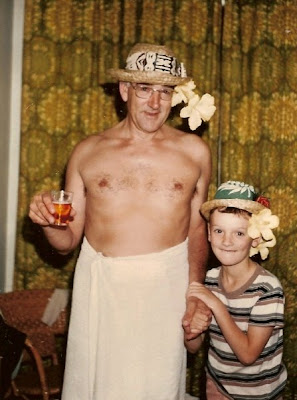 In 1972, Dad and Mum traveled for an extended period in , only I think for the second time. With supreme generosity, because international travel in those days was still far more expensive than it is now, they arranged for Hamish and me to meet them in , for the May school holidays. I was eight.

The preparations were formidably exciting, because this was to be Hamish’s and my first trip abroad.

It emerged that passports would need to be obtained.

I suppose it is a mark of just how far we have come that I distinctly recall a serious discussion about the absurdity of the need for an Australian passport, when, after all, Fiji was until recently British, and, besides, had a governor-general, and all mod-cons.

Anyhow, at length we did indeed have to get passports.

Mum made an appointment with the nice studio photographer around the corner in , where a not merely serviceable, but rather fine black-and-white passport photograph was duly taken.

In the comfort of his old surgery across High Street, further down Glenferrie Road, Dr. Richard Ham painfully administered the necessary inoculations for Yellow Fever, Typhoid, Cholera, Berri-Berri, Plague, Krohn’s, Warts, and God knows what else, and equipped each of us with the old, bright yellow passport-like documents attesting to the international quarantine authorities the fact that these prudent steps had been taken by a fully-qualified medical practitioner.

Meanwhile, our bookings were made by Juanita Scott, the family’s hard-working, jovial travel agent in an upstairs room in Chapel Street, Prahran, who in due course presented us with our hugely complex tickets, and the complimentary bottle-green British Overseas Airways Corporation hand luggage, emblazoned B.O.A.C., which was of such modest physical dimensions that one now wonders what it is that current air travelers stuff into those bloated caravanserai-sized panniers on wheels.

On the appointed day, Granny and Aunt Anne drove us out to Tullamarine, and bade us farewell.

I have the most vivid recollection of the flight, which was aboard an exciting brand new Boeing 747 Jumbo jet aircraft, and gazing out the window across an endless blanket of fluffy cotton wool sitting over the .

Poor Hamish relinquished the window seat. He must have just turned sixteen, so the journey cannot have been a tremendously exciting prospect for him, nevertheless he was a model brother throughout.

Mum and Dad were waiting to greet us at Nadi, and I still remember the moist hot smell of the tropical air as we scampered down the steps onto the wet tarmac, and trotted over to the insubstantial thatched outbuilding that doubled as Nadi International Airport. A kindly Fijian presented each and every passenger with a fresh lae, of Japonica, I think, and a dazzling smile, our passports were stamped, and I rushed into the open arms of Mum.

We spent our holiday on one of the islands in the Yasawa Group, across Bligh Water. Hamish spent most of his days obsessively beach-combing, and in due course created several enormous necklaces out of the carefully matched little flat, round shells with a hole in the middle that seem to make up almost the entirety of the reef. He made big ones at first, but graduated to increasingly fiddly, smaller sizes.

Meanwhile I hunted for less time-consuming cowries, and raced around literally breathless with excitement for the entire time.

Every evening, at dusk, a statuesque semi-naked Fijian played on a huge drum, hewn from the trunk of an enormous coconut palm, which was the announcement that dinner was served.

One night we made friends with a couple from Ann Arbor, Mich., Ivan and Betty-Anne Duff, who, it turned out, knew one of Mum’s Davidson cousins, Cherry Zlatnik, who had been one of the bridesmaids at Dad and Mum’s wedding. She ended up marrying an American college professor, and lived in Ann Arbor for a while. It seems an astonishing coincidence, but, I suppose, such collisions are a natural consequence of modern tourism.

I remember being transfixed by the blueness of the Melanesian reef water, which, until you see it for yourself, is impossible fully to appreciate: a blue of such crystalline clarity, luminosity, and depth, that it seems to be something more akin to liquid glass than ordinary salt water. Last year I went back, and it is still the same. 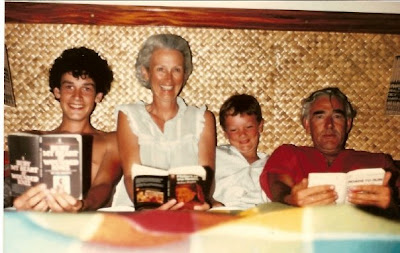 Here we are, en famille, tucked up in bed: beautiful Hamish, Mum, Dad, and me between them, sunburned, and giggling immoderately. Hamish is reading Bury My Heart at Wounded Knee, the classic by Dee Brown.

I’m not sure what Mum is reading, but someone like Chaucer is on the cover, and it therefore looks suspiciously like a prescribed English literature text for the , where she was enrolled as a part-time mature-age undergraduate (B.A., 1982).

Dad is almost certainly reading a thriller, or perhaps a racy spy novel, something diverting.

Later, we drove from Nadi to Suva, around the southern side of the main island, Viti Levu, and although the car was brimming with luggage and four passengers and there was not an inch of spare space, I remember Dad stopping the car to explain to an old Fijian gentleman, whom he spotted trudging wearily along by the side of the road—wearing the standard shirt and tie, zig-zag skirt, robust sandals, and carrying a small suitcase—that, much as Dad would love to be able to give the old boy a ride to town, unfortunately it would not be possible, so please would he accept our apologies?

It was a typically thoughtful, if somewhat redundant, and slightly awkward gesture, proffered by the kindest and gentlest of men. The old Fijian gentleman must have thought we were insane, and, if so, I think he probably had a point.

Posted by Angus Trumble at 9:25 AM