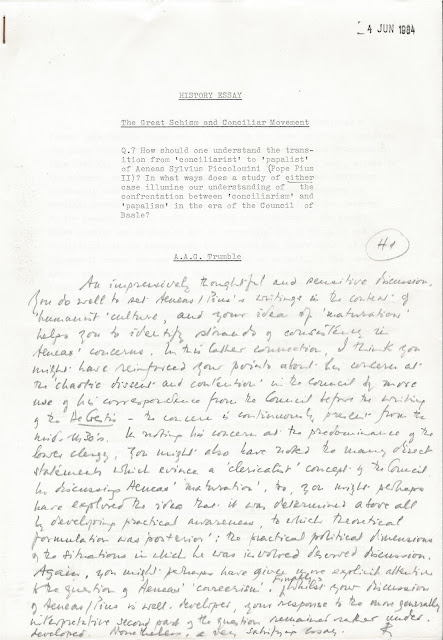 Another mind-boggling discovery while sorting through old papers. When in May 1984, aged nineteen, I wrote this undergraduate essay for the late and much lamented Ian Robertson, who at that time was serving as chairman of the Department of History in the University of Melbourne, he paid what strikes me today as the astounding compliment of returning it with comments that more or less amount to another essay, in his elegant trademark penciled longhand. Who in universities these days has the time or energy to follow suit? My purpose in transcribing it here is neither to boast nor to preen, but rather to wonder at the seriousness with which Robbo engaged with each and all of his no doubt rather callow students—and surely at the expense of his own research. His book Tyranny Under the Mantle of St Peter: Pope Paul II and Bologna took him decades to finish, but fortunately he got there with just a little time to spare.

An impressively thoughtful and sensitive discussion. You do well to set Aeneas/Pius’s writings in the context of “humanist” culture, and your idea of “maturation” helps you to identify strands of consistency in Aeneas’s concerns. In this latter connection, I think you might have reinforced your points about his concern at the “chaotic dissent and contention” in the Council by more use of his correspondence from the Council before the writing of the De Gestis—the concern is continuously present from the mid-1430s. In noting his concern at the predominance of the lower clergy, you might also have noted the many direct statements which evince a “clericalist” concept of the Council. In discussing Aeneas’ “maturation,” too, you might perhaps have explored the idea that it was determined above all by developing practical awareness, to which theoretical formulation was “posterior”: the practical political dimensions of the situations in which he was involved deserve discussion. Again, you might perhaps have given more explicit attention to the question of Aeneas’ “careerism.” Finally, whilst your discussion of Aeneas/Pius is well-developed, your response to the more generally interpretative second part of the question remained rather under-developed. Nonetheless, a very satisfying essay. R

Thank you, dear Robbo. The fact that I have not one iota of a recollection of what Aeneas Sylvius Piccolomini, the future Pope Pius II, did or said at the Council of Basle (or in fact at any time) is slightly creepy, and actually I am having some trouble remembering when and why the council happened at all. Still, I suppose the mystery of higher education is how quickly and completely the subject matter evaporates when life carries you in completely different directions through later decades. What is also amazing is how comparatively complex and sophisticated that course for undergraduates evidently was. I do recall that in his elegantly drafted lectures Robbo dragged us into a veritable thicket of debates, many of them highly complex and theologically obscure, that swirled throughout Europe in the period following the Great Schism of the western church, but he managed to make the general councils of the church themselves fascinating and frightening and fun. For me this was the perfect follow-up to my wonderful classes with Geoff Smith towards the end of my time at Melbourne Grammar School, in which we contemplated the sex lives of the condottieri, the sinister methods of the Council of Ten, the banking practices of Florentine agents in London, Paris, and Antwerp, the power of the Arte di Calimala, among many other issues. Now those have stayed with me.
Posted by Angus Trumble at 12:49 PM