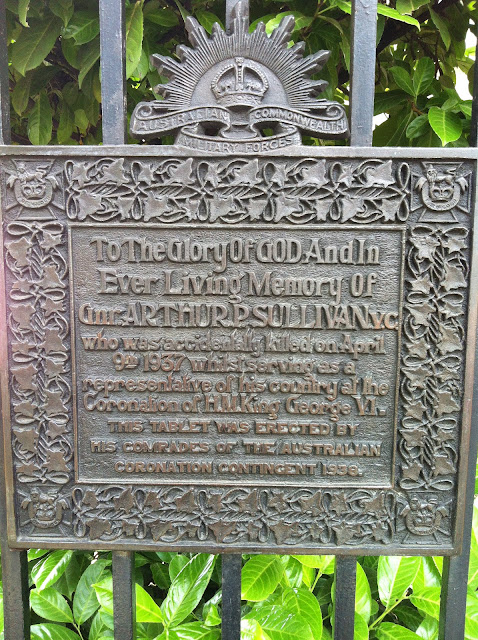 Lately whilst strolling along Birdcage Walk, I noticed this bronze plaque—one of the many residues of Australia, usually pungent, that are dotted all over central London. It reads: “To The Glory Of GOD And In / Ever Living Memory Of / G[un]n[e]r. ARTHUR P. SULLIVAN, V.C. / Who was accidentally killed on April / 9th 1937 whilst serving as a / representative of his country at the / Coronation of H.M. King George VI. / THIS TABLET WAS ERECTED BY / HIS COMRADES OF THE AUSTRALIAN CORONATION CONTINGENT 1938.”

Arthur Percy Sullivan was born on November 27, 1896, at Crystal Brook, about fifteen miles southeast of Port Pirie in South Australia. After completing his education in 1913, he was offered a clerkship at the National Bank of Australasia in Gladstone, not far away. After several stints at branches in Broken Hill, New South Wales, and at Maitland, back in South Australia, Sullivan enlisted as a volunteer foot soldier in the 10th Battalion of the First A.I.F. in April 1918, and embarked for Europe in July. Though he saw no action at the front before the signing of the Armistice on November 11, Sullivan transferred to the British army’s North Russia Relief Force, and served in the 45th Battalion of the Royal Fusiliers. The battalion landed at the White Sea port of Archangel on June 5, 1919, and began to deploy immediately to relieve the original expeditionary force which had been fighting the Bolsheviks in Russia since 1918. By July 1919, the 45th Battalion had moved 150 miles towards the front line. On August 10, 1919, they arrived at the Dvina front, where Sullivan’s brigade were ordered to launch a diversionary attack in aid of the evacuation of the last remaining members of the 1918 expeditionary force, to boost the morale of the White Russians, and to harass and disrupt Red positions. Sullivan was twenty-two when he performed the following deed for which he was straightaway awarded the Victoria Cross:

For most conspicuous bravery and devotion to duty on the 10th August 1919, at the Sheika River, North Russia. The platoon to which he belonged, after fighting a rearguard covering action, had to cross the river by means of a narrow plank and during the passage an officer and three men fell into a deep swamp. Without hesitation, under intense fire, Corporal Sullivan jumped into the river and rescued all four, bringing them out singly. But for this gallant action his comrades would undoubtedly have been drowned. It was a splendid example of heroism, as all ranks were on the point of exhaustion, and the enemy less than 100 yards distant.—The London Gazette, September 29, 1919.

Sullivan returned to Australia, and went back to work at the National Bank, this time at head office in Sydney. In 1934, he was invited to join the Australian contingent at the Coronation of King George VI and Queen Elizabeth and to return to England the remains of Sergeant Arthur Evans, V.C., a British soldier who had died in Australia. The Australian Coronation Contingent comprised 100 soldiers, 25 sailors, and 25 airmen. Half the soldiers were serving troops and half were returning veterans of the A.I.F. Of the latter Sullivan was the only V.C.

On April 9, 1937, eleven days after ceremonially handing over Evans’s ashes and 34 days before the coronation, Arthur Sullivan accidentally slipped on the wet pavement of Birdcage Walk, right on this spot outside the Wellington Barracks, and hit his head on the stone kerb. He was taken to hospital, but died soon afterwards from the severity of the wound.

Sullivan was given a full military funeral in London where the Australian contingent’s salute volley was respectfully returned by the Foot Guards. Field Marshal Sir William Birdwood and a dozen British V.C. winners attended the funeral. A month later, a respectful gap was reserved in the ranks of the Australian contingent as they marched in the coronation parade.
Posted by Angus Trumble at 1:03 PM