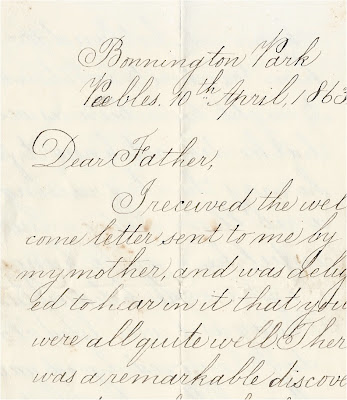 When he wrote this letter to his father, Alexander Hay Borthwick, my great-grandfather William Borthwick was a boarder at the Bonnington Park Academy, a school for boys established not long before in 1858 at Peebles on the River Tweed in Scotland. The hand is simply exquisite. He was at this not quite thirteen years old.

I received the welcome letter sent to me by my mother, and was delighted to hear in it that you were all quite well. There was a remarkable discovery made in this school on Thursday week. We found in a certain boy named David Barclay an heir to the Scottish throne, but the worst of it is there is no throne in Scotland for him to inherit, so I think it might have been as well that he did not know it, for he may think of raising a rebellion, and if unsuccessful he may be hanged. We got a whole holiday last Friday as it was “Good Friday.” I enjoyed a good game at cricket, and after it was finished some of the boys went out to a walk with one of the tutors to see a small house called the “Black Dwarf’s Cottage.” It is very small, and the door is not quite three and a half feet high. A man showed them the dwarf’s portrait. He has a very large head with a kind of nightcap on it, and a long pole in his hand. His right name is David Ritchie. The first eleven got their cricket things last Friday, but we only got ours last night, and I think they are very good. Mr. Angus, our minister, who is on the continent, is coming home soon. I hope Mother, Alexander, and Janet are quite well. With kind love to all at home,

Posted by Angus Trumble at 1:11 PM