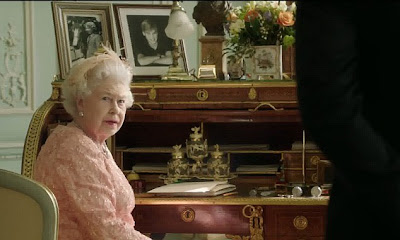 I loved the little film that was made by the BBC and slotted into the beginning of last evening’s opening ceremony for the Games of London, celebrating the thirtieth Olympiad of the modern era. The conceit is simple enough, and therein, I suppose, lies its charm—two British icons, one fictitious and the other real, brought together in a flight of whimsy, yet at the same time with a measure of inherent logic. Of course, in an ideal world, Ian Fleming’s unassailable Bond, James Bond, would be entrusted with the task of escorting The Queen from Her Majesty’s Private Audience Room at Buckingham Palace to a waiting helicopter, and delivering the sovereign safely to that massive event, she who for longer than any other person has received and read weekly reports prepared for successive governments in Whitehall by the once secret British intelligence services. The exquisite note is one of slight tension, even a hint of urgency, on the part of Bond, as the clock strikes half past eight, and a corresponding determination on the part of Her Majesty not to be hurried (but, equally, not to delay). “Good evening, Mr. Bond,” says The Queen, with a suggestion of sprightliness, and, incidentally, effortless authority—and not the sort to which clever actors resort. “Good evening...Your Majesty,” replies Bond, who then follows The Queen out of the room, past Thomas Gainsborough’s magnificent 1777 full-length portrait of Anne, Duchess of Cumberland. Surely it must have been a glitch in the editing suite, but am I the only person who noticed the unfortunate exclusion of that moment in which Commander Bond surely bowed—correctly, and immediately upon entering the room: a clean, crisp motion of the head and neck only, and not the flamboyant deep waist-and/or-shoulders version that one occasionally observes among ill-briefed ambassadors, middle-European royalty, and on stage for curtain calls?
Posted by Angus Trumble at 8:30 AM