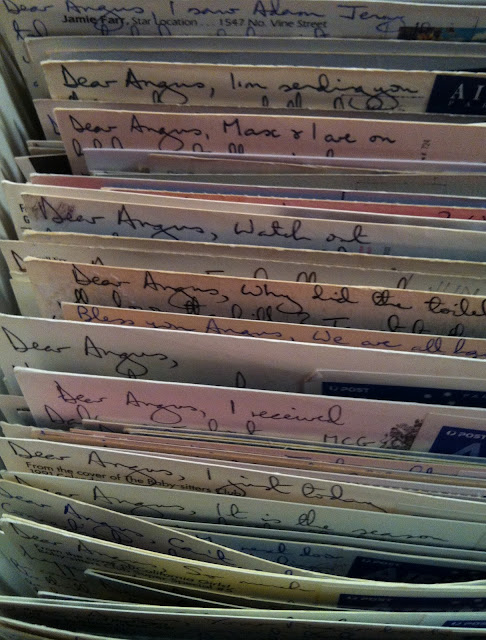 Hardly a week goes by when I do not receive at least one picture postcard from my beloved elder brother Hamish, sometimes several. This has been the case for at least 37 years, probably longer. Through all but approximately fifteen of those years we have been separated by long distances—north and south, east and west. Since Hamish went off to Cambridge in 1974, shortly before my tenth birthday, I have kept them all, hundreds and hundreds of them—all written in his unique, self-disciplined longhand. Today they live in acid-free archival boxes, and I have plenty of empties in reserve. The more recent ones often contain news of his two wonderful boys (my fourth and fifth nephews Mungo and Roy), but more often by this essentially shorthand route Hamish brings to my mailbox apothegms, witty remarks, riddles, and shrewd observations, in other words much food for thought. And this is not even to mention his many amazing scrapbooks. It is a vast and accumulating act of brotherly love. I am ashamed that at times I may have been inclined to take it for granted, so consistent and reliable and rhythmical is the pattern of the correspondence, wherever I happen to be. If it were ever necessary to reconstruct the long sequence of my home addresses on three continents I need only consult the boxes. Hamish’s choice of postcard is never conventional, indeed there is ample head-scratching in store for future historians and anthropologists who will no doubt wonder, based on my collection, what form of collective psychosis produced through the second half of the twentieth century such limitlessly baffling fodder for the printing press or the postcard rack. It is also notable that in carrying out his unending task of written communication Hamish has without doubt bolstered the income stream of Australia Post. Last night, whilst sitting up in bed and browsing through my treasure, I wondered if, prior to the introduction of postal processing by machines—which can be a little rough on postcards, there were any postal and telecommunications workers toiling away in the sorting rooms of the G.P.O. in Melbourne who came to recognize the steady flow of postcards from such a clearly discernible hand, and looked upon them with fondness—or even started to worry if, at length, a fortnight went by without one or two flowing in from Korumburra or Fitzroy. There have rarely been any such lacunae. And this may well be a source of continuing fascination at the G.P.O. because, since the advent of artificial intelligence, I rather doubt whether the post office computers, no matter how advanced, are sufficiently versatile to adapt themselves to Hamish’s hand-writing. His usually minute but clearly legible letters have for as long as I can remember been adorned with looping descenders of flamboyant scale and proportion.
Posted by Angus Trumble at 7:28 AM