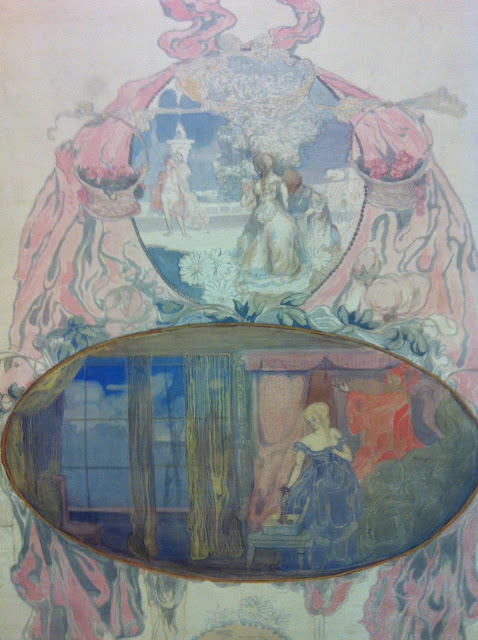 One of the most exciting aspects of our exhibition Edwardian Opulence: British Art at the Dawn of the Twentieth Century (which opens here at the Yale Center for British Art on February 28 next) is the opportunity this affords to exhibit for the first time in more than a century the suite of nine silk panels that were decorated in 1895 by Charles Conder for a small boudoir in the eighteenth-century style in La Maison de l’art nouveau de Samuel Bing. The eight slender silk panels, and the much larger ninth panel that they flank have recently been repaired and conserved by our colleagues in the department of Asian art conservation at the Metropolitan Museum of Art in New York. They were a vast amplification of Conder’s approach to delicate fan decorations. Like those, he painted his silks in watercolor. Conder’s most ambitious decorative project, far more ambitious than any of his subsequent silks, is composed of medallions, vignettes, and cartouches linked by fluttering ribbons, swags, and other airy motifs, in which are set pastoral and decorative scenes, essentially without any specific subject, but more generally alluding to assignations, scenarios, and ambiguous encounters—in bed chambers, beside urns on parapets, in groves and bowers. They were intended to complement new furniture in the style of Louis XVI, and Bing was especially proud that all of his rooms, Conder’s included, were to be lit with electric lights. Conder’s decorations form a kind of dream world, embedded in the eighteenth century, but occasionally referring indirectly to the doomed characters in Balzac’s series of novels La Comédie humaine, by which Conder was fascinated, and also the curious mischief-making of various characters borrowed from the commedia dell’arte. Feminine love, and a keen interest in Lesbian situations both mesmerized Conder, and often informed his choices of motif and the underlying basis of his figure compositions, together with sinister men who watch and scheme, as in this case. Lately the question has arisen as to what if any specific subject may be identified here; but we in the tight-knit international community of Conder-istas insist that the artist’s iconography was determinedly non-specific, and formed a powerfully erotic, opium- and absinthe-induced dream of strong women such as this décolleté lady who toys with the contents of her jewel box, urged on by the sinister, gesturing figure of Pantalone in red, who probably stands for the general notion of greed, or the pairs of watchful lovers at either side of the broad parapet in the different register above—all suffused with the fragrance drifting from baskets or garlands of flowers, or warm breezes that disturb the dandelion, the bed canopy, the gauze curtain, the butterfly’s wing, or ruffle the peacock feather, or make the candles smoke. These are some of the elements of Conder’s vision, always melancholy, and usually executed so as to make his silks look old. Such is also the opinion of my excellent colleague Stephen Coppel in the department of prints and drawings at the British Museum, whom I visited last week to discuss these very questions, and we are in total agreement. Towards the end of his life Conder marked with rose petals his favorite passages in Claude Phillips’s monograph about Antoine Watteau, and that same vague, indolent, but richly evocative sensibility is what filled his suite of silks for Bing. Quite obviously nobody in Paris then had the faintest idea of what Conder was up to, except for a small group of the mostly English friends who loved him, as do those of us who have been fortunate enough to stray into his mind world—the late and much lamented Ursula Hoff, Ann Galbally, Barry Pearce, Stephen Coppel, and certainly the collector Barry Humphries, who knows as much as anyone about Charles Conder, and probably more than most. The nagging problem for we Australians, and for Conder himself, is that the artist has yet to find his proper place in the recognized pantheon of Edwardian artists at either side of the Atlantic. In that respect I have high hopes for this part of the exhibition. For Conder—born in Tottenham, raised in India, trained in Sydney and Melbourne, lured to Paris (where he was befriended by Toulouse-Lautrec), and in due course re-adopted by England, then rescued in 1901 and nursed thereafter until his death in 1909 by the wealthy widow and erotomaniac Stella Maris Belford—the opportunity to exhibit a large body of work in La Maison de l’art nouveau alongside such a distinguished group of colleagues including Maurice Denis, Paul Ranson, Édouard Vuillard, Henry van der Velde, Albert Besnard, and Frank Brangwyn (among others) ought to have made Conder’s reputation in France, but instead he was singled out and viciously mauled by a number of more than usually bigoted Parisian critics. At length his silks proved impossible to sell. Much later, through the kindly influence of Hugh Lane, Conder’s suite passed into the collection of the American collector John Quinn, who at first intended to install them in a room in his New York townhouse, but sold them instead in 1917 to Mr. and Mrs. Francis P. Garvan. By this roundabout route Mr. Garvan eventually presented them to the Yale University Art Gallery as part of his immense gift of about 10,000 objects of mostly American decorative arts, to mark the Garvans’ twentieth wedding anniversary. And here Conder’s silks have remained ever since, awaiting rediscovery.