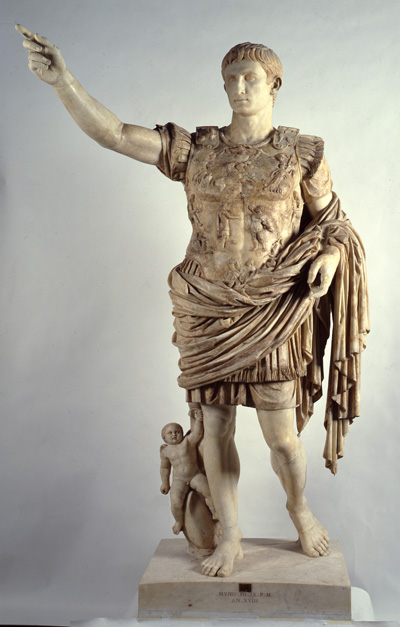 Unpacking boxes lately, I came across an old undergraduate essay I wrote for my dear teacher Ronald T. Ridley, in his Roman historiography course in the Department of History at the University of Melbourne in about 1984 or 1985. I was amazed, upon re-reading it, to discover that in a way it anticipated by a good 25 years part of the subject matter of my last book, because in my essay (typed with a liberal snow of white-out) I discuss the famous statue of the Emperor Augustus that was excavated in 1863 at Prima Porta, a few miles north of Rome. Something of that topic must have lodged permanently at the back of my mind, though I am quite sure that while I was writing The Finger: A Handbook I had no conscious recollection of it, none whatsoever. Indeed I seem to have worked back over some of the same ground, and arrived at different conclusions.

In my essay, I wrote: “Augustus is often said to adopt the stance of adlocutio, that is, the posture in which a Roman general addressed his troops. The outstretched arm which is typical of the pose stems rather abruptly from the shoulder without the complex muscular reactions that accommodate the out-stretched limb in Greek sculpture (in the Polykleitian Diadoumenos, for example). These are in any case concealed beneath armour, but most other respects the sculpture satisfies what has been described as the Roman “appendage aesthetic.” There can be little doubt that the arm’s position was conditioned by its iconographical purpose rather than by the overall compositional conception of the sculptor(s).

In Latin the term manus is applied not only to the hand as a member of the body, but also to “the various potencies of the hand,” to express states of emotion, and to indicate all kinds of political and social relationship. The phrases which refer to political and legal “yielding,” “assistance,” and “force” all make use of the term manus where they appear in Livy, Tacitus, Sallust, and others. The manumissio or release of a slave from the manus or domination of his master is another example of the extension of the term. All kinds of obligations were made legal by the handshake, the dextrarum junctio, or by the pouring of a libation. It was possible, before entering a contract, to send dextras, right hands in effigy, to invite the other party to a renewed handclasp. Livy’s description of C. Mucius Scaevola’s act of thrusting his right hand into the flames on which Porsenna had ordered him to die (L 2.12-13, 506 B.C.), receives particular attention. Thomas Cranmer probably knew the story also. Similarly, when Ovid describes Ulysses’ entry into the house of Circe, he is careful to emphasize the hero’s handclasp with the sorceress, a pledge, at least on one level, of good faith (Met. 14.292 ff). The handclasp stemmed from a particularly ancient form of magic, and the disembodied hand image was used again and again in ancient ritual. On Greek grave stelai, for example, the handclasp stands for the continuing bond between the living and the dead. The Roman hand image also had an apotropaic function, as it appears on a metal plate once affixed to a ship. Above all, the appearance of disembodied clasping hands on coinage and their relationship with the concepts of fides and concordia  shows the full extent to which the gesture was synonymous with and even shorthand for abstract political ideas.

Books about oratory shed further light on the powerful Roman awareness of the semantics of gesture. In his Institutio Oratoria, Quintilian wrote at length about the importance to the orator of countenance. “Gesture is productive of grace” (11.3.65); “the greatest influence is exercised by the glance” (11.3.72), and by the attitude of the eyebrows (11.3.78). Most importantly, he prescribed precise gestures for different types of speech (11.3.84; 92). Quoting from Cicero’s De Oratore (2.45.188), Quintilian covered various gestures deployed for different purposes—including those of the feet, and the fingers (11.3.124 ff; 137 ff).

The only snag is that we cannot now know for certain whether the Prima Porta Augustus was actually made to adopt the adlocutio mode, because all of the fingers of the right hand (except for the ring finger) have been found to be modern restorations. This would certainly make sense archaeologically, because it would be almost perverse for the hand to have survived intact, even only through the course of being imperfectly unearthed and brought by cart to the Vatican. It is therefore quite possible that this statue of Augustus may have originally held a spear or a wreath in the right hand, so the meaning of the statue would have been quite different from that of military commander addressing either his notional troops or a real crowd of passers-by.
Posted by Angus Trumble at 10:59 AM