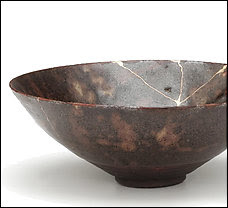 On Wednesday morning Mark Aronson and I took the Acela on a discreet mission to Washington, D.C. Mark is our Chief Conservator of Paintings. Happily, by chance, we converged with our wonderful senior colleague Joseph J. Rishel (Gisela and Dennis Alter Senior Curator of European Painting before 1900 at the Philadelphia Museum of Art), who boarded the train in New York. Our lively conversation between Penn Station and 30th Street, Philadelphia, where he got off, ranged freely over Busby Berkeley, the Empress Carlota of Mexico, the brilliance of Angela Lansbury, and Jesuit missions in Peru, etc. However, Joe also slipped in a recommendation to see Morandi: Master of Modern Still Life at the Phillips Collection, and also a tiny exhibition at the Freer Gallery of Art called Golden Seams: The Japanese Art of Mending Ceramics.

Kintsugi is the Japanese art of mending broken ceramics with lacquer resin, and embellishing the joins with lustrous gold. That practice is one of those curious signals of a vast gulf that separates the aesthetic values of east and west, and, for that matter, between China and Japan.

On the whole, in the European and western ceramic traditions we have for centuries tried to mend broken things so that the damage is invisible. This was also the practice in China, where the imperfect technique of fixing broken pots with discreet metal staples that anchor the pieces from behind developed quite early.

However, for centuries in Japan they preferred to take advantage of ceramic misadventure by actually drawing attention to it by means of kintsugi, especially when the new aesthetic element thus added either comments on, converges, or even elides with the shape and colour of the original vessel—making it look even more beautiful and, incidentally, valuable than before.

It seems that certain connoisseurs were not averse to engineering breakages so that precious vessels could be mended in this way, and beyond the sinuous lines—some exquisitely fine, occasionally spidery and nervous, others unctuous, broad, plump, and fluid—the volatile elements of chance and happenstance, in other words the randomness of these sudden breakages, lends to this art its clever brinkmanship with the big twin concepts of time and impermanence.

A further element of kintsugi is maki-e, the gradual accumulation of surface effects impressed, as it were, upon the dozens of thin coats of lacquer resin (although I think they are built up by means of the brush), for example a vibrant network of minuscule leaves and flowers. These nevertheless embellished only certain of the mends—for example a missing or shattered portion of the foot or rim—and stand in shimmering contrast with the unctuous celadon or other luminous or earthy glazes with which the vessel was originally fired.

It is an act of rare chutzpah, maybe, to mount an exhibition of only a handful of objects, each and every one of which has at one time or another been broken, but it is to the infinite credit of the Smithsonian and the Freer that Gallery 6A has been given over to it until next November. Do not miss it.

Posted by Angus Trumble at 9:41 AM