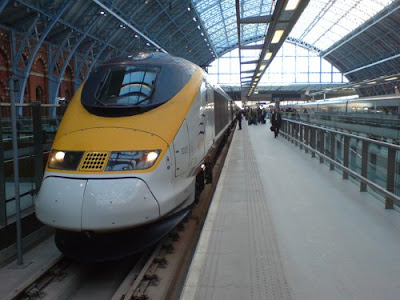 Jonathan Jenney is quite right: The Eurostar rocks.

Thanks to brand new track laid through Kent, it now takes only two hours and fifteen minutes to go from Paris Gare du Nord to London St. Pancras: an hour and twenty minutes to Calais via Lille (approx 190 miles); twenty minutes at low speed through the Chunnel; and thirty-five minutes to cover the 75 miles or so from Dover to London. That’s keeping to an average speed of nearly 130 miles an hour.

To say that this contrasts with the hour and forty minutes only occasionally attained by MetroNorth over the distance of approximately seventy miles that separate New Haven from Grand Central Terminal in New York, or the meager ten minutes you gain by choosing Amtrak’s far more expensive, so-called Acela service to Penn Station (at exciting average speeds of 42 and 46 m.p.h. respectively) is a woeful understatement, and scarcely believable in a country that is just now celebrating the fortieth anniversary of putting men on the moon.

Further, last night, upon returning from London, I grasped to my infinite annoyance that it can take much longer to crawl across the Borough of Queens, immured in dense traffic between John F. Kennedy International Airport and the Robert F. Kennedy Bridge (formerly the Triborough), than it takes to travel by train from Paris to Calais. This is wholly absurd.

Surely the tens of millions who cluster all the way along the corridor between Boston and Washington, D.C., deserve a fast train, a genuinely fast train, and not the filthy, noisy, cramped, bone-jarring tin cans that are this wealthy, populous super-nation’s feeble excuse for one.

All one can assume is that those in authority in the Congress, in the relevant state legislatures, and in the tired old city halls scattered along the route have never actually experienced the joy of traveling in comfort and safety aboard a proper train.

When challenged on this point, with tedious regularity fast-train skeptics in this part of the world tell me that the cost of straightening out the kinks in the old tracks that are so hemmed in by the vast conurbation of the north-east is prohibitive; that this sort of infrastructure project would in any case be impossible, and the cost of traveling by such a fast train far too high for the vast majority of passengers.

To which I say: stuff and NONSENSE. If the French, Belgians, and British can lay their fast track under the ocean bed, and through densely populated regions such as Kent or Flanders (only two hours by train from London to Brussels), there is no reason why it cannot be done through Massachusetts, Rhode Island, southern Connecticut, New York, New Jersey, Pennsylvania, Delaware, Maryland, and the District of Columbia.

Get out your shovels and dig—right under Long Island Sound if necessary. Harness some of those bail-out billions and use them for something more useful than shoring up greedy banks and insurance companies. Recruit armies of construction workers in urgent need of gainful employment, and an opportunity to shed lots of weight; get gasoline-thirsty vehicles off the roads; wean America off lorries, creaking under-sized jet aircraft, abusive geriatric flight attendants, and traffic jams. Liberate travelers from the enormous risk attendant upon sharing the interstate highways with the average motorist—each one more dangerous than the last. And, incidentally, let us make it possible for hundreds of thousands of people realistically to transform dozens of depressed cities in the rust belt such as New Haven, Conn., Poughkeepsie, N.Y., Allentown, Pa., etc., by actually moving there, taking advantage of the extra breathing space and cheaper rent, whilst commuting daily to their places of work in (for example) midtown Manhattan—because each of those legs really ought to take only twenty to twenty-five minutes by fast train.

If you don’t believe me, take Eurostar and see for yourself.

Posted by Angus Trumble at 7:04 AM