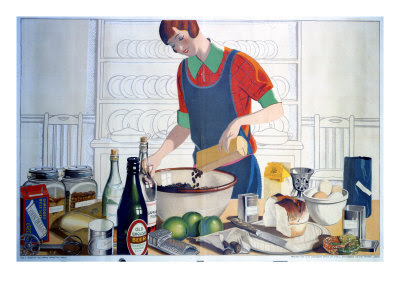 Princess Marie Louise was probably not aware that by so enthusiastically recommending the exciting concept of an “Empire” pudding at the Food and Cookery Fair at Olympia in November 1926, she was getting herself mixed up in a sticky political issue. The Fair was in any case a grand event, tied from the outset to imperial trade—in tough competition with California, Florida, Mexico, and Central and South America. According to a carefully worded advertorial placed in the Australian press, the fair also addressed (inter alia) “the Decline of Cookery”:

Master chefs from all parts of the world exhibited the products of their art at the cookery exhibition—the greatest ever held—opened at New Hall, Olympia, Kensington, W., last month. There were dishes by soldiers, sailors, artisans, hospital workers, domestic cooks, and Boy Scouts. An exact replica of the Prince of Wales’ dinner to V.C.’s in the House of Lords last November was one of the chief exhibits. Mr. R. C. Vaughan, caterer to the House of Lords, who arranged the original dinner, and Maître A. C. Juriens, who cooked it, made the preparations. Mr. Vaughan, interviewed by a “Daily Mail” reporter, said:—“Cookery has never reached a higher stage of artistry before—that is, professional cookery. The cooking of our housewives and young women, however, is of a very different order. There is hardly a girl to-day who knows how to fry a chop. They are too busy drinking cocktails, driving motor-cars, and playing golf to learn how to cook. So many young people live in service flats, dining in restaurants, that cookery in the home is a thing of the past. (Argus, March 8, 1930, p. 11 S[upplement].)

The aggressive marketing efforts of Australia House in respect of the dried fruit growers of the Riverina were occasionally at odds with the larger concerns of the Empire Marketing Board, however they converged on this occasion at Olympia, when the idea of an imperial pudding seemed to make good sense. At short notice the Board engaged the advertising firm of F. H. Benson, Ltd., to place the following advertisement for a fairly impressionistic “Empire” pudding in time for Christmas:

Take 1 breakfastcup full of each of the following eight ingredients: Canadian flour, Australian or South African raisins, Australian sultanas, Australian currants, chopped mixed peel, English or Scottish beef suet, breadcrumbs. Also 1 English cooking apple, 4 to 6 eggs (Home laid), 1 teaspoonful pudding spice (Indian), 1 wineglass Jamaica rum, sufficient milk to mix, grated rind and juice of one lemon. One English 3d bit for luck! Mix well. Place in greased basin. Cover with greaseproof paper: tie on cloth and steam or boil 6 to 8 hours. Here you have a quite simple recipe. It will make as delicious a plum pudding as you have ever tasted. And you will enjoy it all the more if you remember that by using Empire fruit to make it you will give a helping hand to the thousands of British Overseas—most of them ex-Service men and their families—by whom that fruit is grown. Buy Empire Goods. Ask—is it British?

The problem was that the produce of New Zealand, and that of numerous crown colonies were missing from the recipe, and feelings were duly hurt. Therefore early in 1927 it became necessary for drastic remedial action, extending to the highest echelons of the government. This and various other aspects of the story have been taken up recently by Kaori O’Connor in her long article “The King’s Christmas Pudding: Globalization, Recipes, and the Commodities of Empire” (Journal of Global History, Vol. 4, 2009, pp. 127–155).

Retrieving the matter from Bensons, and securing the co-operation of Buckingham Palace, towards the end of the summer the Empire Marketing Board was in the happy position of being able to issue the following, carefully revised edict:

The King’s Chef, Mr. [André] Cédard, with Their Majesties’ gracious consent, has supplied to the Empire Marketing Board the following recipe for An Empire Christmas Pudding:

No doubt Princess Marie Louise was among the forty or so guests who tucked in at Sandringham on December 25, but naturally the vast size of the royal pudding so configured in due course caused a headache for the Board, to whom tens of thousands of patriotic students of domestic economy applied for a more manageable, and incidentally less costly version of M. Cédard’s flamboyant recipe—which, after all, required a basin the size of a bathtub; semi-industrial equipment for mixing, a pudding cloth almost as big as a sail, and upwards of twenty-four hours of volcanic cooking. Meanwhile questions of taste (Cypriot brandy?) and sensitivities arising from disproportionate representation, such as for example only a teaspoonful of allspice sought from the Indian Empire, were thankfully offset by sectarian considerations and the tropical climate: Christmas puddings were at this date not high on the agenda of Gandhi, Nehru, or Congress.

In any event, the Australian recipe that appealed so much to Princess Marie Louise at Olympia in November 1926 remains fugitive, but I am—as always—optimistic.

Posted by Angus Trumble at 8:52 AM