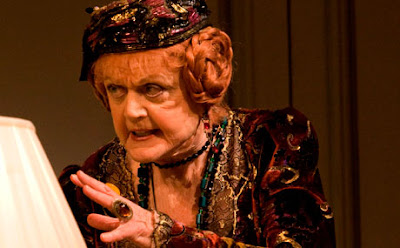 One of the great advantages of living near New York City is comparatively easy access to Broadway theater. Last Sunday I went with some friends to see the matinee performance of Noël Coward’s Blithe Spirit at the Sam S. Shubert Theatre at 225 West 44 Street. This fine revival stars—and the verb is for once deeply appropriate—Rupert Everett, Christine Ebersole, Jayne Atkinson, and Angela Lansbury in the role of Madame Arcati. They receive strong support from Simon Jones, Deborah Rush, and the fine Broadway debutante Susan Louise O’Connor, whose Edith the maid achieves at least one show-stopping moment involving a tray laden with breakfast things.

However, it is Angela Lansbury’s Madame Arcati who has stayed with me for days, like some lingering but essentially benign ectoplasmic manifestation.

Angela Lansbury is six months older than The Queen, and at 83 (turning 84 in October), she is absolutely astonishing. Margaret Rutherford created this role on the West End stage in 1941, and in 1945 brought it to the screen with Rex Harrison, Constance Cummings, and Kay Hammond, directed by David Lean. He was 36; Noël Coward was by then 46.

In any event, Margaret Rutherford’s was the Madame Arcati of cat hair, tweed, and knitted gloves. Angela Lansbury’s Madame Arcati replaces these with henna, chunky jewelry, and more than a whiff of patchouli. Rutherford was essentially cuddly; Lansbury is far sharper with the dinner guests, and decidedly angular in motion, and delivery. Her fabulous trances involve nervous but sprightly, high-kicking dance maneuvers, with Irving Berlin gramophone accompaniment, on a shallow stage in (at best) semi-darkness—wearing high heeled shoes. Clearly she deserved this year’s Tony, her fifth, and in this regard Angela Lansbury now equals the record previously held by Julie Harris. Bravissima!

However, what struck me most about Blithe Spirit—which is, of course, an old-fashioned farce, and a very funny one—is how strongly it still holds up as a play. There are at times hints of genuine darkness, and numerous comparatively surprising dashes of domestic sturm und drang, as well as a little wry consideration of the larger themes of credulity, condescension, and death. Noël Coward was a genius, as his very earliest writing for the stage amply demonstrates, as well as a master craftsman of astringent comic dialogue.

If you see nothing else this season (apart from the brilliant revival of Hair), make sure you see this Blithe Spirit.

Posted by Angus Trumble at 8:15 AM