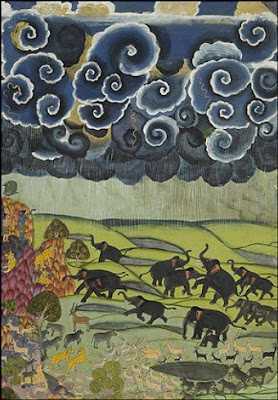 As usual the British Museum blows its competitors—if that is the right word—out of the water. Because just now in Bloomsbury you can see at least three exhibitions or new displays of supreme quality and startling intellectual power, the kind of aesthetic experiences that stay with you for years—and indeed in certain circumstances may be for many visitors entirely transformative.

I shall go into a few of the others on another day, but first: Garden and Cosmos: The Royal Paintings of Jodhpur commenced at the Sackler in Washington, D.C., shuttled to London via Seattle, and will conclude at the National Museum of India in New Delhi later this year and into 2010. There is still time to catch up with it.

Many years ago the National Gallery of Victoria purchased for Melbourne a major collection of miniature paintings from Rajasthan, which were shown there and in Sydney most recently in the exhibition Rajput: Sons of Kings (2004–05).

Impressive certainly, but what the court painters of Jodhpur achieved (and the curators now demonstrate through this beautifully chosen exhibition) was to make the Rajasthani stuff look like so many postage stamps. In artistic terms scale can be a very blunt weapon, but in these big, densely populated sheets the focus is no less sharp than that of the Rajasthani miniature painters, but the scope, the spread, the narrative energy, the splendor of palace life, the religious intensity as, for example, in the highly intoxicated pre-sex gaities of Holi, as well as the exquisite control with which the Jodhpur painters made a consistent, orderly transition from minute leaf, bud, and flower all the way up to the thundering gallop of a herd of elephants trumpeting beneath monsoonal storm-clouds (above)—all these qualities win for the artists a triple gold star for cosmic and political synthesis in landscape, and for the wholly ruthless Singhs of Jodhpur a heritage and a testament of unequalled magnificence.

Ajit Singh was put to death by his second son, Bakhat Singh, ostensibly for screwing his own daughter-in-law, Bakhat Singh’s wife, but this may have been a convenient pretext for Big Brother Abhai Singh to take over, which he promptly did. In due course, after Abhai Singh died and was succeeded by his feeble son Ram Singh, Uncle Bakhat Singh orchestrated a coup d’état  and seized power for himself. However, in due course one of the new Maharajah’s many nieces murdered him—apparently to avenge her grandfather, incidentally turning a blind eye to the small matter of semi-incestuous adultery. What goes around comes around, as we say in the United States. Incidentally, her method: the gift to Uncle Bakhat of a splendid new coat prudently steeped in poison. In other words the eighteenth- and early nineteenth-century Singhs of Jodhpur make the House of Atreus look like Little Women.

This point was not lost on the court portraitists. With the greatest of respect, even whilst merrily spraying buckets of brightly colored water over his ladies during Holi, Bakhat Singh invariably manages to look like a fully paid-up, card-carrying thug. With a large and well-fed tummy also.

Certainly the climax of the exhibition is the sequence of paintings that deal with key episodes in the Ramayana, that centerpiece of Indian culture and religion—for want of a better word. Why is Prince Rama blue? And what about that intriguing army of shrewd, resourceful monkey creatures? How did the subcontinent manage over millennia to arrive at such a very sensible, realistic, and healthy attitude towards sex? And how on earth—no, really!—did the anemic English manage to keep a lid on India for so long, even taking into account the connivance of the princes, whose expediently self-seeking attitudes and internal cutthroat rivalries played so effectively into the hands of the East India Company, and afterwards the extremely under-staffed India Office in Whitehall?

None of these questions are directly relevant to the mighty aesthetic experience proffered by these paintings, especially the explicitly religious ones—for example, the fifth folio from the Durga Charit, entitled Sage Markandeya’s Ashram and the Milky Ocean, with its amazing representation of Vishnu sleeping against the flank of his gloriously tapering fifteen-headed white serpent Shesha, which forms a compact group suspended in turn over a cosmically scalloped ocean—inflected by only two discretely contrived flourishes (maybe waterspouts).

You have to hand it to those shrewd, powerful, illustrious sages, gurus, yogis, etc., who deftly exploited the anxieties of the princes in respect of seeking release from their (ample) attachment to the material world. Where better to pull the political strings than on a pleasant ashram? And the more famous your sage, the more people flocked to him, the more information he assembled from people wanting more than anything else to lay out their woes, the better to make plausible and carefully placed “prophecies” further down the line (hemmed in by convenient generalities)—in other words, rather like the Oracle at Delphi, this was a highly effective intelligence gathering system which rendered spies, phone-tapping and all the other crude methods of our era wholly unnecessary.

But, above all, I join with my dear colleague Romita Ray in loving the elephants!

Labels: ashram (political advantages of achieving fame in), elephants, Garden and Cosmos, Holi, The British Museum, The Singhs of Jodhpur