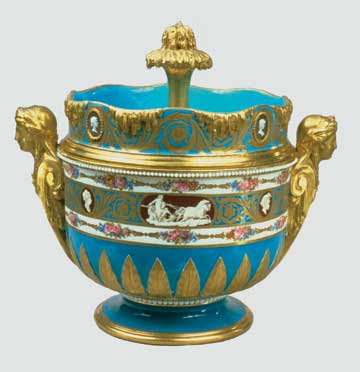 It is impossible to underestimate the value of frequent travel in the professional life of an art museum curator. The opportunity to see dozens of museums, exhibitions, displays, and hundreds, actually thousands of original works of art in radically different settings in the space of a week or so gives you food for thought that lasts for months. It is not a privilege that any of us take for granted; indeed this type of travel can be pretty exhausting. But it is vital if you are going to keep your eyes sharp, and your visual memory stoked up.

However, what is especially curious is that while you can plan a campaign of saturation-looking down to thirty-minute increments, criss-crossing London by tube, or Paris by Métro, you can nevertheless find yourself surprised by a serendipitous sequence of unplanned encounters with works of art that opens your mind to something entirely new, or at least beyond the current parameters of your experience, even your interests.

What did this for me last week in London and Paris was on the one hand, a beautiful display of Sèvres porcelain in The Queen’s Gallery at Buckingham Palace, and, on the other, the newly installed display in the British Museum of the Sir Percival David collection of Chinese ceramics—about which I shall have more to say presently.

A few summers ago I had the wonderful opportunity of seeing numerous Sèvres masterpieces in situ at Windsor Castle, and in other royal establishments, but right now the public can see a brilliantly cogent display of many of the best and rarest of these remarkable objects in the museum setting.

Sèvres may be for many people an acquired taste, but several aspects of this commercial monopoly of the second half of the eighteenth century struck me as especially fascinating—beyond the purely technical matters arising from “process”: hard-paste versus soft-paste wares, the various painter-decorators, formulators of luxurious ground colors, modelers, kiln-operators, gilders, chasers, creators of lavish gilt-bronze mounts, and so on, for whom the annual end-of-year Court sales at Versailles held the key to success.

On one level the elephant in the room of the current Royal Collections is the Prince Regent’s Carlton House, which, if it had survived, would stand as one of the most extravagant and gorgeously decorated interiors of the late eighteenth and early nineteenth centuries. Many of the decorative objects and furnishings that now decorate the other royal residences were purchased for Carlton House, and most if not all of the most impressive pieces of Sèvres porcelain.

With the aid of dealers, auctioneers, and other slightly dubious middle-men, the Prince Regent spent a lifetime picking off these limping antelopes at the edge of the luxury herd: exceedingly rare Sèvres models with royal (usually French) provenance; dessert services, loopy garnitures, wacky covered vases, and intricately perforated jars for pot-pourri, and thousands of other vessels that were disbursed as a direct result of the French Revolution. Even if this program of hi-octane shopping had not nearly bankrupted the nation on at least a handful of occasions, and earned the Prince perhaps the worst reputation of any British monarch of the modern era, his Sèvres porcelain would be ample grounds for distinguishing George IV as one of the greatest collectors of any age.

A relatively unremarked aspect of the Sèvres phenomenon is also the astonishingly rapid development of modern methods of industrial design, production, marketing, and public relations—converging neatly with the far older concepts of breathtaking craftsmanship, microscopic skill, opulence, and princely magnificence. This is to some degree the fount of the modern luxury goods industry, and the fact that Sèvres not merely survived the French Revolution but went on to become a state monopoly that has survived to this day and still prospers points to the important fact that the Versailles shop-front kept up by Louis XV, Mesdames de Pompadour and du Barry, Louis XVI and Marie Antoinette, was only one aspect of the larger enterprise. At length the donkeys of the Court were losers, but the Sèvres manufactory consistently made a killing. 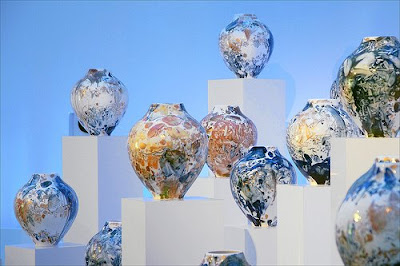 Maybe one of the most breathtakingly beautiful exhibitions I have seen for many years hinges not on eighteenth-century Sèvres, but on Sèvres today. It is a group of 57 large porcelain vases of identical shape (model SR22, leaning heavily towards a shapely Chinese profile), all of which were made and decorated over the past two years and will henceforth reside in the permanent collection of the Musée Guimet (a.k.a. the Musée national des arts asiatiques). These are the result of a remarkably happy collaboration between the Sèvres factory and the 89-year-old Chinese painter Chu Teh-chun (Zhu Dequn)—the kind of cross-cultural exchange in which the visionary French seem to specialize.

This one-room show is arranged in the top floor rotunda of the Musée Guimet, in which, for no particular reason, almost invariably I find myself the sole visitor—and Wednesday morning was no exception. The Place d’Iéna is, after all, not at all hard to find, and there is a Métro stop right outside the front door.

What you see is a forest of kindred vessels (above) with a sumptuous cargo of complex decoration, bringing together radically different practices and surface effects. The Sèvres surface is here as smooth and as glossy as polished crystal; by contrast the film in which we see the artist at work between separate firing processes emphasizes the richness and thick texture of his painstakingly slow gestural strokes with enormous brushes laden with inky Sèvres blue, and the gradual accumulation of thousands of smaller strokes and lines—line (the “bone of the brush”) being the ancient bedrock of Chinese painting, richly sustained by the tradition of literati connoisseurs and hugely learned poet practitioners. 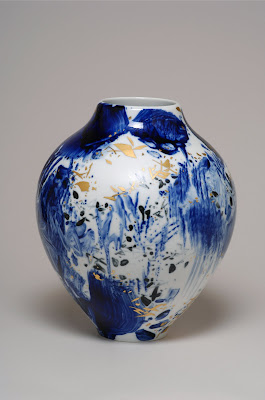 Some of his marks are tiny; others are flamboyantly applied or modified with the fingers, and/or allowed to dribble down the shoulder to the foot. An opulent snow of gilding brings the surface decoration into comfortable alignment with the Sèvres “aesthetic,” which moreover reduces to a uniform consistency all but the slightest hints of surface texture. The luster of the creamy porcelain and the richness of the decoration merge indivisibly. What I would not give to own one, preferably this example with its deeply resonant but perfectly judged chords of blue-black!

Yesterday morning, whilst killing time before leaving for Heathrow, I popped into the Wallace Collection, and for three quarters of an hour immoderately ogled their amazing Sèvres—at least several pieces of which are identical to models in the royal collection. Indeed the Marquess of Hertford was evidently the King’s most formidable competitor for big-ticket Sèvres—of which Catherine the Great’s bespoke pair of ice-cream coolers (top) is among the most breathtaking—as much for their glorious shape as for the brilliant faux-cameo decorations, an effect especially requested by the forward-thinking Empress, bless her. And now to get hold of Rosalind Savill’s magisterial three-volume catalogue of Sèvres in the Wallace Collection and learn all about it, or at least as much as I can absorb.

No doubt there will be other incidental discoveries on my next working trip to London, but I shall long remember this as the summer of Sèvres, of Chu Teh-chun