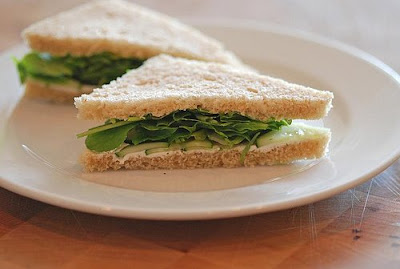 Last week in London I heard for the first time in years the endearing English shorthand term for sandwiches, the diminutive “sarnies.” Time: approximately 1:00 p.m., Wednesday, July 8. Place: The English Tearoom, Brown’s Hotel, Albemarle Street, Mayfair. Speaker: My colleague Gillian Forrester, Curator of Prints and Drawings here at the British Art Center. Host and eyewitness (for whom sarnies were until then a closed book): our Director, Amy Meyers.

The odd thing was that over lunch almost exactly forty-eight hours after this, unprompted by me or anyone else, our London colleague Kasha Jenkinson, said it across the table to Gillian: “sarnies”!

Interestingly in both cases the reference was not to what we were actually eating, but what under radically different circumstances we might have been eating had we not been so lucky as to find ourselves where we were at those particular moments.

On the other hand, the term was on each occasion applied with much affection, so I am not quite sure what it really denoted, except that so often unusual words and expressions crop up in twos, threes, and even (for the especially attentive) fours. Perhaps this is because after the first time you notice something like this, your ear is far more likely to register it again soon afterwards. In any case, there we were—and here we are.

Indeed, I’m not quite sure why sarnies struck any sort of chord with me, because I have no recollection of ever having heard this word uttered at home in Australia, where “sambies” and, hair-raisingly, “sambos” were once fairly widespread—though not, I think, among Borthwicks and Trumbles of this and previous generations. I am told that “sangers” is sometimes also said, but I have never heard that one either.

When I was little I don’t think Mum said anything other than sandwiches—hers are still delicious—and Dad never mentioned them at all, so evidently we four boys followed suit. Perhaps this is as it should be.

Then why did sarnies strike me as somehow deeply familiar? Could this be a case of some vestigial remnant in the brain of something concocted by Mike Leigh, or indeed Alan Ayckbourn (though certainly not Noël Coward)? No doubt the answer lies somewhere on the internet, but let us not be distracted, deflected, or bogged down by trivia.

Posted by Angus Trumble at 3:11 PM