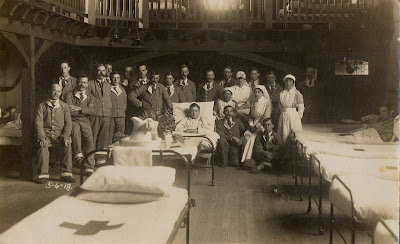 Four years of industrialized slaughter on the Western Front brought the Pearson family, like everybody else, crash-landing into the twentieth century. Granny volunteered as a nurse at the Rickmansworth Convalescent Home, near Chorleywood. Here she is in April 1918, the third nurse from the right. The Matron, Miss C. L. Owen, who was appointed in 1916, sits to her left. Compared with the horrors of the field hospitals in , Rickmansworth must have been comparatively pleasant and peaceful. Nevertheless, the terrible cost of the war is powerfully evident in the weary faces of these men, and in the number of beds. 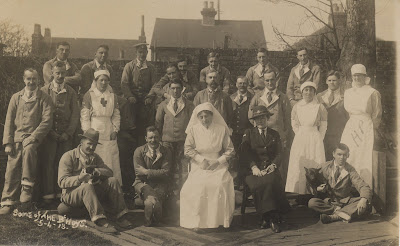 This other photograph taken in the open air is a little more cheerful, and no doubt these men were fitter and stronger than the others. The inscription, lower left, is curious. It reads “SOME OF THE B’HOYS,” and the date, April 5, 1918. “B’hoy” and “g’hirl” are amply-documented nineteenth-century Americanisms, actually New York-isms, and whether these soldiers convalescing at Rickmansworth were in fact American, or the term was simply imported to via the stage or screen, it is an intriguing hint towards the identity and distinctive shorthand of the photographer. Granny is standing on the far right, helpfully labeled “H. P.” As far as I know she never spoke or wrote about her experiences at Rickmansworth, but it must have been grim. By then she was twenty-five, and her younger sister a war widow.