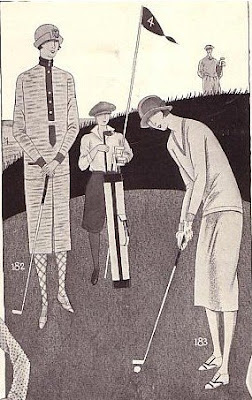 Mongie, pronounced “Mungie,” and the G is soft, not hard, was a genius with children.

Towards the end of the summer of 1937–38, whilst still recuperating from tuberculosis, Mongie kept Mum busy at Metung—she was not yet twelve years old—by creating “a detective drama,” for radio, entitled Doris and Archie, or, The Mystery of the Headless Woman. The manuscript, which Mongie wrote into an Aero exercise book, was accompanied by illustrations carefully clipped from old copies of the Illustrated London News, Harpers and Queen, etc.

According to the title page, Doris and Archie was “written and unpublished in 1938 by Helen Borthwick (Jun.), aged 9 [sic] (the dangerous age), & Mongie Bruce-Pearson (very jun.).”

In due course, Mongie lent the manuscript to her friend F. H. Legg who actually broadcast it on commercial radio. As she put it: “Lent to Ferocious Hotspot Legg. Why? Because I think he is too light-headed, and badly in need of a little cheap reading. Kindly do not drop butter from the toast or egg from the mouth on the pages.”

The text is enchanting, but achieves its most comic effects through the absurdity and placement of the images. Their absence here is merely a temporary problem, and no worse, surely, than it was for Legg’s listeners, who must have been delighted, stupified, or possibly both.

Soon after this, Mongie spent some months living in the same nursing home cum boarding house and sanatorium in Croydon where her own Aunt Minnie, the novelist Mary Grant Bruce, was also temporarily residing. Granny took Mum to visit them for a few days during the school holidays some time in the middle of 1939, and Mary Grant Bruce took that welcome opportunity to test on Mum (who was by then twelve or thirteen) the unfinished manuscript of her new novel Karalta. Clearly, however, Mum’s greater childhood enjoyment was in composition and art direction, not editing, nor providing feedback to slightly high-maintenance professionals, no matter how eminent.

Together, Mum and Mongie proceeded to compose a more ambitious work, certainly longer, entitled Cynthia and Harold, or Love Will Find A Way, “A Novel of High Life, for use in commercial radio stations.” Stay tuned, but for the time being Doris and Archie will have to do:

The mystery of the headless woman

The Honourable Doris Dillwater was a fine, upstanding type of English girlhood. One of those who look “just right” in whatever they wear, Doris was frequently to be seen yachting at Metung, or on the Trotting Track at . Very reckless at the wheel of her sports car, she was frequently seen on the race track at , or golfing at .

Her father, Lord Wobblegoose (Honest John to his cronies) had started life as a humble golf professional. Tiring of this, he joined the army and became a well-known frequenter of all the night clubs, where he was always surrounded with the ladies. He broke all hearts in his mess kit.

His wife, Lady Sybil Wobblegoose, was a well-known society beauty, famed alike for her hourglass waist and her swan neck. In fact, so young and girlish was she that she and Doris were frequently mistaken for sisters.

On coming into the title Lord Wobblegoose (or Honest John) had inherited a magnificent country seat, a Baronial Hall, which he lined with trophies of the chase, a collection for which he rightly became very famous.

Everyone was delighted when the Hon. Doris married that whimsical and well-known Oxford Rugger back, and Cambridge Soccer forward, Archie O’Cedar from . The happy couple took ship for a happy honeymoon in .

Returning to , Archie and settled down in a delightful old-world cottage in the country. Here Doris and her mother, who was a frequent visitor, spent many happy evenings over the wireless, which was always turned full on, as Lady Sybil was a little hard of hearing.

Imagine the delight of Doris and Archie when a little toddler arrived, whom they called Hilderbrand [sic], after a wealthy great-uncle in . What a happy home it was, no-one dreaming that stark tragedy lay ahead.

Waking one morning at the usual hour, Archie was horrified to discover that the Hon. Doris was not beside him. Quickly flying to the telephone he summoned the well-known Scotland Yard man, Detective-Inspector Jones. Swiftly on the spot, the brilliant sleuth was quick to perceive that the bed had not been disturbed, the cot was empty, and—most momentous discovery of all—there were footprints on the table. Jones was completely baffled when he found that the chair had not been sat in. Last—and worst—discovery of all, was that of a headless body under the bed, clad with garments identical with those worn by the Hon. Doris.

On being acquainted with the ghastly tidings, Lady Sybil, who was a visitor in the cottage at the time, sprang to her feet in shocked surprise.

Lord Wobblegoose was quite unhinged by the news; ran away from home, joined the navy, and grew a beard.

On being questioned about her daughter’s disappearance, Lady Sybil recalled that she had last seen the Hon. Doris preparing for bed the night previous. Detective-Inspector Jones, cross-examining Lady Sybil on the Hon. Doris’s personal habits, extracted the information that she (Doris) had suffered from nasal trouble as a young girl. Never baffled for long, Jones soon discovered traces of snow in Hilderbrand’s pram.

Taking Archie with him, he hurried to , where together they scaled the twin peaks of the and Fatterhorn, but without result.

Refusing to be discouraged, they hurried back to where the search became feverish. The Hon. Doris’s photograph appeared in every paper.

At last Jones determined to enlist the help of the well-known lady-detective—Ethel Hollowhead—known in the Force as “the Wonder-Kid of Scotland Yard.”

Disguising herself as a simple village maiden, Ethel visited every night-club in , but in vain. Then taking on the clever disguise of a Lady of Leisure, Ethel spent a weekend in every Stately Home of England, but no result.

Completely outwitted, and in despair at her first failure, Ethel retired from the Force, and took up landscape-gardening.

Unbaffling himself once more, Jones hurried back to the cottage where he made the breathtaking discovery of a towel in ’s bathroom, covered with Indian embroidery.

Hurriedly disguising himself, he flew off to by Air Mail.

Here to his unspeakable delight he discovered Doris, starved, and worn, and in cotton rags, but unharmed amidst ’s teeming millions.

Plied with goodies, soon smiled again, as she told Jones her Tale of Horror.

It appeared that she had been in bed on the night of the 10th when the room was entered by a sinister man (or brute), who had drugged her and her child. Forcing her to make her bed as though it had been unoccupied, he had then placed a headless body under it. Then dragging her child after him, he had placed cotton wool in the pram. (Afterwards mistaken by Jones for snow, a lapse for which he never forgave himself.) Fortunately on their arrival in , her sinister captor hurried off on a fishing trip, and it was during his absence that Jones found her.

Hurrying home, they were met by a delirious Archie, who gave a huge fancy dress party in ’s honour.

Lord Wobblegoose was court-martialed from the navy for swearing. He returned home, and took up golf once more.

Uncle Hilderbrand returned from India quite crippled with Blackwater fever and Boils, shortly died, and left all his money to Doris and her little ones: Cyril, Letitia, Leila, Freda, Maida, Josa, and Wilhelmina (’Mina for short), Walter, Gladys, Cynthia, Gertrude (never very strong), Hilderbrand (stunted from his sinister adventure), and Rose.

While, as for the Hon. Doris and Archie O’Cedar, they just danced their way through life.