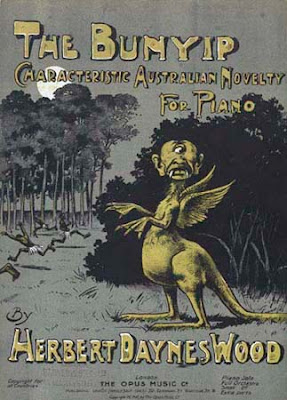 THE BUNYIP, OR KINE PRATIE

(From the Port Phillip Patriot.)

From the earliest date of our intercourse with the aborigines there has always been a traditional rumour amongst them of a creature hitherto supposed to be fabulous, and many extraordinary stories have from time to time been current as to the conformation and habits of this animal. Speculation and inquiry have been on the rack to find out, first—whether there was any reasonable foundation for these traditional runours; and secondly—supposing the animal to exist, to what genus or species of animal does it belong? At the Hunter River [central coast of New South Wales] the reports of the natives would lead us to classify it with the carnivorous species. In this locality it is called Yaa-hoo, and is described as having much resemblance in form to the human figure, but with frightful features—the feet like those of a man, but reversed or turned backwards. In the immediate neighbourhood of the river the animal is called Wowee Wowee, and the blacks picture its haunts and habits as purely aquatic. It is a fact well known to residents and others near that river that the aborigines will not readily venture into the deep and dark pools which remain when its bed is partially dried up. On the Murrumbidgee River, especially on the lower parts [in the Riverina district of south-central and southwestern New South Wales], rumours of the existence of this animal are more than usually rife, and there the aborigines far and wide describe the animal as inhabiting the waters. From their account it has a head and neck like an emu, with a long and flowing mane—feeding on crayfish (with which the river abounds) [yabbies] and occasionally on a stray blackfellow; that it inhabits the darkest and deepest parts of the river, and in some of the lakes and lagoons that longest retain water. This account appears to be “nearer the mark” than any we have met, and the facts we are about to detail will settle the question as to whether such a creature ever existed or not. An animal never yet described by any naturalist “lives, moves, and has its being” [Acts 17: 28, cfr. Aquinas, ST, Q. 18, a.4, thence all the way down to Hegel, Heidegger, and thence to Carlyle, Sartor Resartus] at the present day, and in the land or water of the Terra Australia incognita. At the station of Mr. Hobler on Lake Paika (situated some twenty-five miles below the junction of the Lachlan and Murrumbidgee [roughly half way between Hay and Balranald, N.S.W.] it has been observed that the natives have ever evinced a strong disinclination to bathe in the lake, alleging that the Kine Pratie would attack and devour them, and some short time since two of Mr. Hobler’s servants solemnly stated that, on looking one morning across the lake, they espied on the other side of it, two animals, which they at first supposed to be two horses, but being puzzled about the movements of the creatures, they rode round to satisfy themselves on the subject, but on arriving at the spot they could discover no tracks or trace of any animal whatever. If what they saw, or fancied they saw, were horses, it is probable that they would have left some traces behind them, but as no traces were found, the only conclusion to be arrived at is, either that the creatures they saw were aquatic animals and seen on the water, or that the whole was an optical delusion. Now we may easily suppose that one man’s sight and senses may be imposed on, or perverted, but that the sight and senses of two men could be simultaneously and similarly deceived in open day light, is a matter of no easy belief. Mr. Hobler writes thus:—“Two Kine Praties have been seen at the same time at Paika, and that there is such a creature we are now SURE, as the skull of one, evidently of recent date, and therefore in perfect preservation, has been seen by a Mr. Phelps, a settler in the neighbourhood, and Mr. Stack, brother to the Rev. Mr. Stack, at Maitland [northeast of Newcastle, N.S.W.—it was picked up near Waldare, and is in possession of Mr. Fletcher. Another was picked up by one of the Adelaide travelers, who very sagaciously threw it away [typical], but thinks he can find it again.” Mr. Hobler offered to purchase the skull of Mr. Fletcher, who, well knowing the prize he had got, would not so much as listen to his offer. The skull here alluded to is either in the possession of Mr. Fletcher, son of Dr. Fletcher, or of Mr. Gilbert, Secretary of the Mechanics’ Institute. It is described as being the skull of an animal of the carnivorous order, as is ascertained from the teeth, with a very large cavity for the brain, and a long, protruding bill or jaw, which is broken off before the molares; the lower part is altogether wanting, and so is the top of the skull. Sufficient is however left to show that it belongs to an order of animals not yet described as either of anti or post-diluvian existence. Mr. Hobler also writes, that he has been informed one of these creatures was lately seen at Lake Tarla, situated about eight miles from Lake Paika, making a great disturbance in the water; and that another is known to be in a smaller lake which is fast drying up, somewhere in the same neighbourhood, and that a strict watch is being kept up, with the hope of taking the creature as the element so necessary to its existence recedes. The Weragerie blacks call the creature the Kine Pratie, but the Mutmuts, Watti-wattis, and other tribes, have each their own names for it.