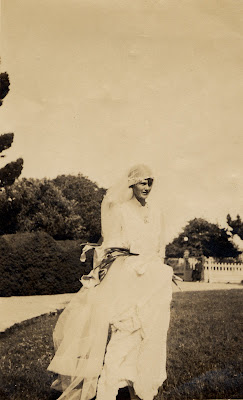 A wedding which aroused a considerable amount of district interest, affecting as it did two of our best known and leading families of a great many years standing, took place in St. Paul’s Cathedral yesterday, when Helen, second [sic] daughter of the late Mr. William and Mrs. Pearson of Kilmany Park, Sale, was married to William, fourth son of Colonel and Mrs. Wm. Borthwick, of Sale. The Cathedral was nicely decorated for the occasion by the many friends of the bride, and the sacred building was filled with interested spectators when the ceremony took place. The bride, who charmed the onlookers by her prettiness, was given away by her uncle, Mr. Alex[ander]. Gooch [Uncle Sandy], and was attended by Miss Mollie Gooch as bridesmaid, and four little pages—two cousins, and [the] two sons of Mrs. M[innie]. Grant Bruce [the novelist, and her husband and distant cousin Major George Evans Bruce]. The bridegroom’s brother, Ronald, acted as best man. The Bishop of Gippsland (Dr. Cranswick), assisted by Canon Haultain, tied the nuptial knot, and the service was choral, Mrs. S. Napper presiding at the organ. The wedding breakfast at was a particularly happy one, and there were no speeches. The happy couple left on their honeymoon by the afternoon train, when again there was a very large attendance of friends to wish them well. Mr. and Mrs. W. A. Borthwick’s future home will be at Fulham [Raeshaw].

Posted by Angus Trumble at 3:38 PM