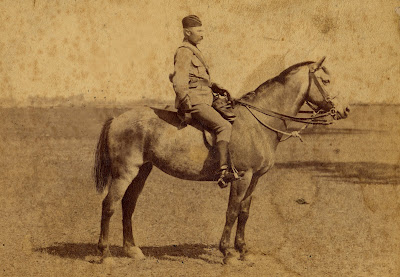 Like their wives, our maternal great-grandfathers, William Borthwick (above) and William Pearson, were lifelong friends and neighbours near in East Gippsland, but they also shared a close involvement in military matters. While not managing his bank, practising as a stock and station agent, or running his property called Bald Hills, William Borthwick was an auxiliary officer in the Australian Light Horse, with various responsibilities, it seems, to do with cavalry training, which took place each year at William Pearson gladly made his land available for that important purpose.

As a Member of Parliament, William Pearson took an active interest in defence matters, and was from time to time co-opted onto colonial defence committees as, for example, when he received the following urgent 27-word official cable from the Bourke Street East Post Office addressed to Kilmany Park at 7.12 a.m. on March 5, 1900:

At least 12,000 Australians served in the Boer War (1899–1902) in contingents raised first by the six colonies and from 1901 by the new Commonwealth of Australia (about a third of the men enlisted twice). Many more Australians joined British or South African colonial units. Most of the 12,000 served in cavalry units formed in each colony, and were often known as mounted rifles, bushmen, or imperial bushmen. They fought in both the British counter-offensive of 1900 which resulted in the capture of the Boer capitals, and in the long, weary guerrilla phases of the war. Colonial troops were valued for their ability to “shoot and ride,” and they performed well on the veldt, which is not unlike Gippsland, the Wimmera, or the Riverina. Indeed, upon their arrival in South Africa, the Australians were described as the fittest, healthiest, best-fed, strongest, in other words the most spectacular fighting force ever assembled in the British Empire. Great-Grandfather William Borthwick helped to train them, and Great-Grandfather William Pearson helped the colonial government decide which ones to send.

At least 600 Australians died in , roughly half in action and half from exotic diseases.

On January 11, 1910, Colonel Borthwick was among the many guests assembled in the Queen’s Hall at Parliament House in Melbourne for an all-male dinner hosted by the Deputy Governor-General “in honour of the visit of Field-Marshal The Right Honourable Viscount Kitchener of , G.C.B., O.M., G.C.M.G., G.C.I.E., &c., &c.,” for which the table plans have happily survived. Apart from William Pearson, who must have been at home at Kilmany Park, every other notable was there, from the prime minister down, including the cabinet, members of the Senate and the House of Representatives, senior army and navy officers, the diplomatic corps, Archbishop Clarke, Drs. Leeper and Sugden of Trinity and Queen’s respectively, the press (even-handedly represented by the Age, the Argus, and the Sydney Morning Herald), even the mayors of Ballarat and Brisbane, and, presumably unaware of the curious genetic congruence, seated towards the end of Table H—between Major Luscombe and Commissioner J. Hay, and opposite Dr. McInerney, Messrs. Bingle, Cerrutty and Hake—“Mr. Trumble.”

Posted by Angus Trumble at 6:31 AM