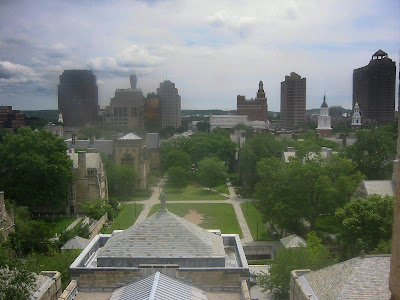 Last night I heard then saw something really shocking.

At about six o’clock a young man walked into the not particularly crowded bar where I was sitting and reading the paper, caught or missed the top step, and came crashing down on the terracotta-tiled floor, head first, not just out cold but severely injured.

I heard it first because I was facing the other way: a massive thud with grace notes of jelly, and muffled cracking. It sounded like the collapse onto concrete of an enormous crate of oranges suspended in an industrial-scale sack of custard. There followed a split second of chilling silence. You knew. You just knew.

I swung around and saw him lying there motionless. All hell broke loose.

A distressed women lunged forward and shrieked: “Oh my God. Call 911!” Most of the male customers were less immediately responsive, I noticed.

“Get towels” and, interestingly, “Quick: give-me-the-thing-of-rubber-gloves.”

I must say the staff were amazing, Max in particular. In less than ten seconds after impact, maybe five (because in a crisis seconds are painfully slow), the ambulance was on its way.

I tried not to look from then on, because so many other people, especially young people, were staring at the poor bloke. I found myself staring at them staring. Something about that annoyed me. Stop staring.

Yet of course I stole two or three quick glances over my shoulder, couldn’t help it. By then his right leg was twitching horribly. He looked youngish, reasonably compact, and in every other respect apparently healthy. He had a shaved head, and his jeans were freshly laundered.

It felt as if the ambulance and firemen took ages to get him onto a stretcher and out of there, but they actually did it quite quickly, and with supreme skill. When they wheeled him out he was vaguely conscious, twitching slightly less, but bleeding copiously.

Never have I been made so painfully aware of the hiss of oxygen coming from a cylinder.

I have trotted down those same steps a thousand times over the last few years. It could so easily have been me. But it wasn’t, and presumably that is one good reason why it wasn’t.

Hello, welcome to your life. What does this mean for his? He wasn’t drunk. He just missed the top step. Fragile à go-go. I suppose he was lucky he didn’t break his neck on the corner of the nearest heavy wooden table, or get killed in a car accident, or vaporized in a plane crash.

Our vectors seem so fixed and certain, but they’re not. You can make choices and to some extent those choices may help to keep you safe and sound, but it’s not always like that. Into any given moment the supernatural index finger of happenstance will suddenly point and say, “This is here; I am now, and you are nothing but flotsam, drifting in a sea of improbability and outrageous circumstance. You are the random element, not me. Drink?”

And then they washed the floor with disinfectant, and everybody went back to what they were doing before.

Posted by Angus Trumble at 8:24 AM