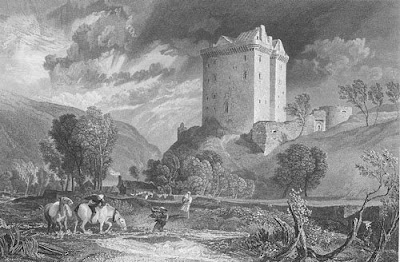 In times of merriment, my late father used to enjoy tormenting Mum by referring to her, and her Borthwick forebears as “filthy lowlanders.” This was based on the presumption that his own mother’s Campbell antecedents were sufficiently embedded in the Highland clans, notwithstanding the Hanoverian outrages of Colloden and Glencoe, of which Mum was careful to remind him, somewhat sniffily, by way of slightly less good-humoured risposte.

The Borthwicks were indeed a border family, but with some distinction.

According to a lengthy memorandum drafted in his elegant longhand by my great-great-grandfather, Alexander Hay Borthwick, and prudently preserved for posterity by Aunt Jean—evidently much consulted in her researches—the Borthwicks of Raeshaw, meaning the border-dwelling Borthwicks of Dumfriesshire and Midlothian, were descended from William Borthwick, fourth Lord Borthwick of that Ilk, of Borthwick Castle in Midlothian (above).

Lord Borthwick was Governor of Stirling Castle and guardian of the infant King James V following the catastrophic defeat by the English in Northumberland of the invading Scots army at the bloody Battle of Flodden Field on September 9, 1513. Lady Borthwick, whom this Lord Borthwick married in 1491, was Margaret, the daughter of John Hay of Yester.

In the early seventeenth century, Lord Borthwick’s junior, junior, junior descendant, William Borthwick, wound up as Laird of Raeshaw at the head of Gala Water in the Scottish borders, about twenty miles southeast of Edinburgh.

“The families of Borthwick and Pringle,” wrote Mr. Borthwick, “were at that time the most influential in that [unpromising] part of the country, and as even happens in these present times [c. 1880], they had constant disputes about their marches [boundaries] which led to a quarrel between the above William Borthwick and James Pringle, resulting in a duel with swords in which James Pringle was killed.”

The wording here is intriguingly passive, as if James Pringle’s death was some kind of regrettable accident, and William Borthwick did not, in fact, slay him in cold blood.

“William Borthwick fled to Eskdale in Dumfriesshire and remained hid in the woods there for a long time, his property and everything belonging to him being confiscated. He never returned to Gala Water, but when he had reason to think the duel was forgotten and that he was safe from prosecution, he took the big sheep farm of Howpasley at Howick on Borthwick Water in Roxburghshire, where he died, leaving two sons, William and Thomas.
It is not clear what Mr. Borthwick meant here by the hold-all term “took.”
In any event, “They kept Howpasley until the disturbances in ‘Bluidy Clavers’ time, c. 1685 [the death of King Charles II] when they were advised not ‘to sign.’”

John Graham of Claverhouse, first Viscount Dundee (c. 1648–1689) was responsible for policing the Scottish borders during the long period of religious unrest during the 1670s and 1680s, and was notorious for his persecution of the Covenanters. “Not signing,” here, apparently refers to the Borthwicks’ determination along with many others in the southwest of Scotland to adhere to the Presbyterian conventicles, and to resist the imposition of bishops, the Church of Scotland, and everything else to do with the Catholic King James VII [of Scotland; II of England], and the Stuart hegemony.

“In consequence of this their farm and stock were taken from them. All they had left were a few sheep which were ‘at grass’ on the farm of Glendinning on the Westerhall Estate.” According to a marginal note, Mr. Borthwick fastidiously notes that property was farmed by his father until 1874.

“The Lady Johnstone of that day had the farm of Glendinning in her own hands. She ordered all her sheep into the faulds so that those belonging to William and Thomas Borthwick might be secured (possibly for herself as she was on the other side of religious opinion). However a shepherd named Reeve slipped the sheep over the fauld dyke. Thus they got to the hill and were preserved for their rightful owners. Soon after this William Borthwick took the farm of Glendinning, and in 1701 married Janet Scott, sister of David Scott of Merrylaw.”

Again one notices Mr. Borthwick’s use of the term “took,” and one wonders where this left Margaret, Lady Johnstone, daughter of John Bannatyne of Corehouse and relict of Sir James Johnstone of Westerhall, Member of Parliament, Sheriff of Dumfries, who was thoroughly bound to the Restoration Stuart Court, but let us presume that she was not in any way a beneficiary of the Glorious Revolution of 1688.

The eldest son of William Borthwick and Janet Scott was naturally also William. This William Borthwick farmed Glendinning up to 1753, when he sold his stock by public auction: namely 820 ewes, 520 quinter ewes [meaning ewes in their third year], 490 gimmers [two year-old ewes], 60 dimmonts [ewe lambs after weaning], 560 ewe hoggs [roughly half way between a dimmont and a gimmer], 480 wedder hoggs [castrated rams of the same age as ewe hoggs], 50 old tups [rams], and 40 tup hoggs [uncastrated rams of the same age as wedder hogs], yielding a grand total of 2,960 beasts, not including black cattle and goats. Unfortunately the hammer prices have not survived, and although William purchased with the proceeds a farm called Cassock, he was forced to retire, aged sixty, a ruined man.

This is not by any means the only instance of financial incompetence on the part of our various Scottish ancestors, nor indeed of the tendency to resort to violence, and those patterns offer surprisingly little reassurance from the genetic standpoint. Still, there is some pluck and resilience also, and, in common with “Egon, Fool of the Forest,” that wild and undaunted person from whom Dad claimed direct descent via the Campbells, Mum’s Borthwick ancestor was evidently shrewd enough to survive in the woods of Dumfriesshire for quite a long time. Whether either strand has better equipped us to lead productive lives in modern Australia, or elsewhere, is another question entirely.
Posted by Angus Trumble at 10:34 AM