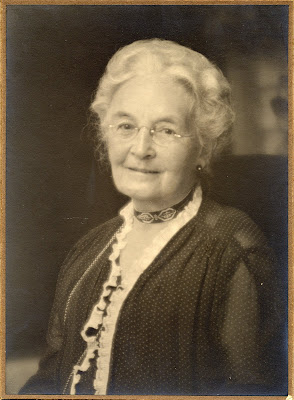 Our great-grandmother, Ada Maud Mary, Mrs. William Borthwick, was the daughter of Edward Connor Bell and his wife Katherine Anne (née Wallen). According to Aunt Anne, the first occasion William Borthwick set eyes on was soon after he arrived in Maffra to be manager of the local branch of the National Bank of , and she was kicking a football in the grounds of the branch of a rival bank of which her uncle was manager. In old age, Da (as she was affectionately known) enjoyed telling her grandchildren that she invariably wore this pretty beaded black silk neck-band to keep her head on.

This charming portrait photograph was taken in in the mid-1920s by Ruth Hollick, who was more famous for her portraits of children. Hollick worked from 1920 to about 1929 in a busy studio at and afterwards at Moonee Ponds.

After the death of her husband, Colonel William Borthwick, Da moved from Sale, East Gippsland, to Melbourne, and, accompanied by her two unmarried daughters, Aunt Jean and Aunt Kath, settled in a comfortable house on the east side of Adelaide Street, Armadale.

Posted by Angus Trumble at 3:19 PM