Denver, the “mile-high” city, is a fascinating mixture of the hearty, out-door culture of the Rocky Mountains, and the gritty endurance of the plains. Somewhat counter-intuitively, one feels the attraction of one, and the wide eastward barrier rolled out by the other. Colorado is nothing if not friendly, and as usual in a span of three days I met a host of glorious locals, who are as proud as punch of what they have achieved in the west.

Naturally, the earliest settlers are much in evidence, and, rising near the junction of West Colfax and Broadway on the edge of Civic Center Park, in the lee of the Colorado State Capitol with its gilded dome, is the wacky Pioneer Monument, which went up in 1910. 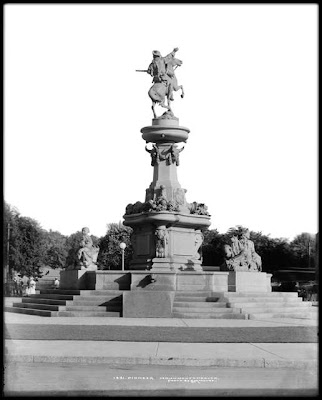 The statuary was conceived by the Brooklyn-born expatriate celebrity of fin-de-siècle Paris, Frederick William MacMonnies, a pupil of Saint-Gaudens. The mounted figure at the top is the famous frontiersman Kit Carson. MacMonnies’s original idea was to place a Native American in this prominent position, but not surprisingly public opinion was forthrightly opposed. The site is held to be the symbolical, if not the literal end of the Smoky Hill Trail, which brought many waves of pioneers to Denver from St. Louis and Kansas City, Missouri. The bronze plaque (below a snarling wild cat) gives the particulars:

HERE WAS THE END OF THE FAMOUS SMOKY HILL TRAIL, IMMIGRANT AND STAGE ROAD EXTENDING FROM THE MISSOURI RIVER TO DENVER, TRAVERSED BY PIONEERS IN 1858, SURVEYED BY W. G. RUSSELL IN 1860, ROUTE OF BUTTERFIELD’S OVERLAND DISPATCH AND WELLS-FARGO EXPRESS, THE TRAIL TOOK ITS HUMAN TOLL—DEATH BY THIRST AND INDIAN RAIDS.

One of the four Bernini-esque personifications, the muscular “pioneer woman,” cradles over her lap a loaded shotgun. She was placed there by the grateful Daughters of Colorado. Her bearded, hat-wearing male counterpart, meanwhile, reclines with the gold and silver prospector’s pick-axe, a curious fully-clothed riff on Neptune with his trident. All around this pungently classicizing, colonnaded plaza are dotted many other bronze statues on an even grander scale: colossal bison, bucking contortionist cowboys, and lithe gun-toting Navajo braves. These gestures are as insistently Neronian as the genocide was evidently accomplished in short order.

Ruminating on this melancholy legacy, I found myself transported to the playroom at 18 Denham Place, where we watched numerous episodes of F-Troop (discontinued in 1967, but in Australia repeated many times for years at the convenient time of 4.30 p.m.).

Clearly, in those days we had very little conception of the underlying historical realities, and I feel somewhat abashed to admit that I adored Chief Wild Eagle of the Hekawi Tribe, those shrewd partners in O’Rourke Enterprizes, and his delinquent son Bald Eagle. The Chief, I recall, was played by the Italian-American character actor Frank De Kova. There was also Roaring Chicken, the decrepit medicine man, a role created by Edward Everett Horton, the ne plus ultra of Ivy-League Yankee gentlemen and an alumnus of Columbia University (Phi Kappa Psi), as well as his chosen successor Crazy Cat. All produced wise old Indian sayings.

I have just now remembered how the Hekawi got their name. According to Chief Wild Eagle, “Many moons ago tribe move west because Pilgrims ruin neighborhood. Tribe travel west, over country and mountains and wild streams, then come big day... tribe fall over cliff, that when Hekawi get name. Medicine man say to my ancestor, ‘I think we lost. Where the heck are we?’” Actually the scripts by Arthur Julian, Howard Merrill, Tom Adair, James B. Allardyce and others were generally brilliant, especially when navigating the awkward matter of the innate character of the “fictional Hekawi,” who whilst undoubtedly timorous were nevertheless shown to be at least canny, but more often shrewd:

Chief Wild Eagle: What else?

Chief Wild Eagle: Have you ever seen a war dance?

Chief Wild Eagle: Stop with the moons. When?

Cold comfort indeed, and no doubt almost as insulting as it is possible to be to the memory of the many First Nations people who perished whilst trying to resist the real, unstoppable westward expansion of the United States. In the midst of the huge spring snow storm last Friday morning it was as if their ghosts were sighing in the mountains, and weeping over the plains. I realize I have never to my knowledge met a genuine First Nations American.

Posted by Angus Trumble at 9:48 AM