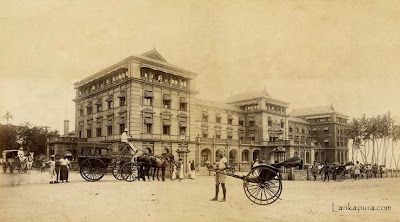 According to the brief but lively memoir she wrote towards the end of her life, Granny described the thrill of sailing to England for the first time at the end of 1912. Prior to their departure:

A sewing woman came for a week and made dresses for us all, the day nursery was full of materials and some of us doing the finishings off. In those days the idea was to wear old clothes on the ship and put them through the porthole at our journey’s end. We had masses of luggage, there certainly were six of us, but I think about 50 cases! When we left Sale by train, the station master had some detonators put on the rails which went off with a tremendous bang! I remember catching the boat and Dad being very worried that we would miss it as we went down by train with some friends—the O’Hara Woods and Hal Maudsley among them—and Dad and Mother by train…

The trip was wonderful then as it still is. I shall never forget the night before we got to Colombo, and smelling those lovely scents which came out over the ocean. And then seeing Colombo and the East for the first time. One felt it just could not be true. We had a whole day there and drove to many places including the Galle Face Hotel [above]. There was great excitement after we left Colombo. Two Germans who had joined onto our party, together with the sister of some girls we were at school with, and whom Mother was asked to look after, left the ship, and after a few days a cable came from them to this girl asking her to look in the drawer of a writing desk for papers they had left behind. They were taken, of course, straight to the captain. I don’t know what happened to them, but we were all sure the men were spies!

In her boisterous and deliciously patriotic novel From Billabong to London (1914) Mary Grant Bruce borrowed this thrilling episode from Mongie, her niece, and embellished it.

David Linton, his son Jim, daughter Norah and their childhood friend and companion Wally Meadows, sail from Melbourne to Tilbury aboard the Perseus, by the long route via South Africa. War has by this date broken out, and to guard against enemy shipping, the Perseus observes a nightly black-out. However, a few days out of Durban, Norah notices sinister flashing lights coming from a nearby cabin. She, Jim and Wally go straight to Captain Garth. At first two Swedish crewmen come under suspicion, but after an ingenious trap is successfully laid, the German spy turns out to be none other than innocuous Mr. Smith, a businessman who had almost missed the boat in Melbourne :

He broke off, with a shout. “Watch him!”

Mr. Smith had sprung towards the port-hole, a dark object in his hand. Jim was just too quick for him. He caught the up-raised arm. The little man fought fiercely and silently for a moent; then he gave in, yielding what he held with a little sigh.
“Pocket-book,” said Jim, examining it…

Beyond the bulky pocket-book which had so narrowly escaped a watery grave, there was little of an incriminating nature to be found on the prisoner. Dixon took charge of any papers in his pockets, and of his keys; and in a corner of the cabin Wally picked up an electric torch—a powerful one, of new and elaborate design.

“Signalling apparatus,” said Dixon, glancing at it. His anger suddenly blazed out.
“What do you mean by it, you cowardly hound? Who paid you to sell your own people to the enemy?!”

“The enemy?” said Mr. Smith. “My own people?” He glanced round with sudden pride. “My people are your enemies, and I am one of them. I am a German!”…

According to Captain Garth, recapping with the Lintons post hoc,

“Schmidt is his name—Hans Schmidt. There’s any amount of evidence against him in the papers; the pocket-book he tried to throw out of the port contains much full and true information about our [troop] transports, a complete cipher code of signals, and translations of various other codes. It’s evident that the police were on his heels in Melbourne—that’s why he joined so hurriedly. He covered his tracks well too; made them think he had gone to Brisbane.”