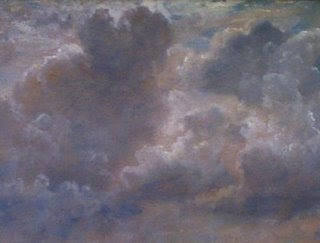 I have done a good deal of skying—I am determined to conquer all difficulties and that most arduous one among the rest…The sky is the source of light in nature—and governs everything. —John Constable to John Fisher, October 23, 1821

Among the hardest tasks for the art museum curator is to draft wall labels of approximately 100 to 150 words. To some degree the choice of what is most important to say and what must be left out is an invidious one, and all too often the former can seem dull compared with the latter, especially when peripheral information may allow our visitors to see something new, curious, or unexpected. All such decisions are subjective, and one is further restrained by the need to address an audience which ranges from schoolchildren to senior scholars and everyone in between—as far as possible on an equal footing. The more complex the works, as in the case of John Constable’s cloud studies, the more challenging is the task. Here is an example of what I wrote about the Yale group not long ago:

Constable’s cloud studies are among his most original and startling creations, an effort to understand and capture the formation and movement of clouds, and the impact of the shadows they cast, and the light they filter over everything below. Constable’s preoccupation with clouds reached a climax in 1821–22, when he was living in Hampstead, and made his studies from exposed vantage points on the heath. He carefully noted on the back of most of his studies the time of day, location, direction of the wind, and other meteorological information, clearly intending to use his studies as a resource for future consultation, possibly prompted to do so by various criticisms that had earlier been leveled at the brooding skies in his finished landscapes. The cloud studies remain among the most impressive attempts of any artist to come to terms with the nature of light and void.

Naturally, of course, whole books have been written about Constable’s cloud studies, beginning with Kurt Badt (John Constable’s Clouds, 1950), and culminating in John E. Thornes’s John Constable’s Skies: A Fusion of Art and Science (1999). Among the most important questions arising from detailed work of this kind are: How did Constable’s cloud studies relate to earlier, especially French, Dutch and Flemish cloud studies? How did they evolve from being essentially a kind of index card system in the artist’s studio, not intended for public exhibition, to assuming the character of freestanding works of art soon after Constable’s death? How do museums’ methods of display acknowledge this dramatic change in status and reception? What is the relationship between the cloud studies and the rapid growth of the formal study of meteorology in Constable’s lifetime, especially in the work of Luke Howard (On the Modification of Clouds, 1803), Francis Beaufort (of the scale) and others? And what has been the place occupied by the cloud studies in the life of the mind through the calamitous twentieth century when our founder, the late Paul Mellon, acquired one of the largest collections of paintings by Constable that exists, and, incidentally, at the same time financed the translation into English and underwrote the publication of the complete works of Carl Jung?

Post hoc, there is tremendous pressure upon the visitor and the curator to see the clouds as somehow presaging the twentieth-century discovery and exploitation of abstraction, of the subject matter of nothingness, but it is clear that John Constable would have found this idea completely unintelligible; to him the locomotion of the clouds provided a rational framework for all light effects in the landscape, as he stated explicitly in the letter to his friend John Fisher. Yet the clouds continue to fascinate, and especially to engage the interest of contemporary artists, including, lately, David Schutter of Chicago.

It has been a pleasure to work with David in bringing his project to fruition, and to witness the formation of a new and intriguing chapter in the ongoing history of Constable’s clouds, perhaps more cirrhus than cumulus, but certainly bound to illuminate a fertile art-historical landscape, as much as that landscape has evidently provided nourishment for David’s new work.
Posted by Angus Trumble at 10:37 AM