Granny at The Hermitage 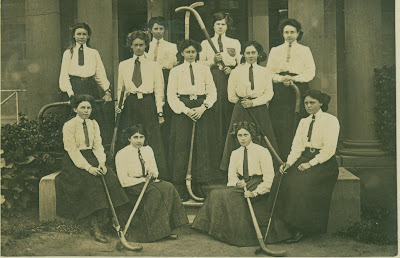 Granny began school at The Hermitage in Geelong on July 27, 1908, aged fourteen. She left school a half term before midwinter in 1912. She was a probationer, a prefect (1910), a senior prefect (1911), and, finally, school captain (1911–12). In 1909 she attained special honours, was a physical drill senior, and won the fencing and dancing medals. The drill instructor was, predictably, a German, Herr Albers, who was arrested as a spy in 1914. Fencing, meanwhile, was taught by Major Webbe, and dancing by a soigné Frenchman called Monsieur Bibron, who came on Mondays and invariably wore a black morning coat and striped trousers. In 1911 Granny obtained the Senior Diocesan and Senior C.M.A. Certificates, and in the summer of 1912 won the over-16 swimming trophy. Here she is in the hockey team, c. 1910. The girls are (standing, left to right): Kitty Shaw, Helen Pearson (Granny), Mollie Douglass, Margaret Cunningham, Jo Rendall, and Ann Russell, then (seated, left to right) Wynne Douglass, Iris Blythe, Doris Taylor, and Dorothy Newman. These splendid girls never regarded defeat as even a remote possibility.
Posted by Angus Trumble at 12:48 PM