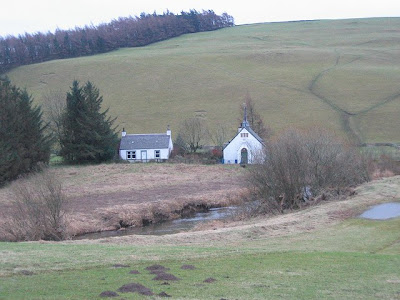 When they got married in Melbourne in 1949, our parents cannot have known that theirs was a distant but plausible echo of a comparable alliance, apparently forged on the Scottish borders during the reign of King David II (reg. 1329–1371), and with profound historical consequences.

In a pungent article entitled “Mr. Gladstone’s Ancestors: The Gledstanes of Gledstanes and Coklaw, A Chapter in Old Scottish History,” (Fraser’s Magazine, No. 606, June 1880, pp. 805–816) the antiquary John Veitch sketched a vivid account of William of Gledstanes and his providential acquisition of the lands of Woodgrenynton: “This was apparently the first addition to the fortunes of the laird of Gledstanes. But another was soon to follow. One John Trumble held the lands of Hundleshope, “the hungry, hungry Hundleshope” of the old picturesque rhyme:

“For the haugh lands were then under water—in fact, a lough—and the hills and glens now to be prized for their stern and savage beauty, their alpine recesses, and the autumn glow of heather, were, perhaps, looked at, in the “days of cattle and corn,” as but a bare possession. Yet old Hundleshope has a fine ring about it—the sound of the horn and the tongue of the hound; for it is in its earliest form the Houndswallhope, or the Hope of the Hound’s Well. And in those far-back days its heights and its wild glens would be the hardest hunting-ground, the best refuge for deer and boar and wolf which even the grand hills around afforded.

“John Trumble got the lands of Hundleshope from David II…Margaret, John’s daughter, only child and heiress, was wooed and won by William Gledstanes of Gledstanes. Matters had been fitly arranged by John Trumble and young Gledstanes in the quaint old fortalice of Hundelshope—now long passed away. In due time there came a son, John Gledstanes…But Margaret Trumble was destined to bring to the Gledstanes another territorial connection. She had property in Teviotdale. In her lifetime, and still in the reign of Robert III [1390–1406], she further resigned to this fortunate son John Gledstanes (called apparently after old John Trumble, her father) certain other lands, which she inherited in the parish of Roberton, by the Borthwick Water” (above)!

Thus William Ewart Gladstone traced his descent from doughty Margaret Trumble, and land traditionally associated with the Borthwicks of that Ilk. “The eminent statesman,” Veitch concluded, “sometimes speaks of there being only Scottish blood in his veins; he may even say that he has the blood, in a long and continuous stream, of the old Scottish Borderer; and therein has always lain an intense fervour—perhaps the truest perfervid genius of the Scot—not unattended by a fine chivalry, a resolute independence, and a noble daring. This nature has never had much sense of compromize; it has been accustomed to straight aim and effort, to a grand self-reliance; and this joined, or rather subordinated, to a burning moral purpose, may explain the fervour—the attraction to some, and the repulsion to others—of the career of a great modern statesman.”

To which we, his distant Australian cousins, lately reconstituted by Peter and Helen, may simply say “Yeah, right-oh.”
Posted by Angus Trumble at 9:46 AM