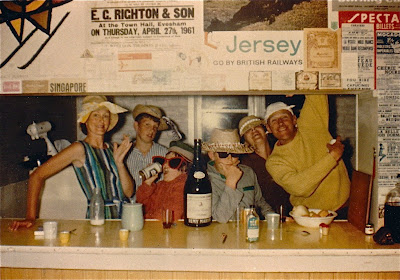 This informal group portrait, which was taken in about 1963 or 1964 by Dad at Metung on the old Zeiss camera, using kodachrome slide film, captures certain innate qualities that have descended through generations of Trumbles.

Above all it is the seriousness, the consistent refusal to engage in light banter or jollity, the unflinching Puritanism (as of Elders of the Kirk), indeed the crippling shyness that strike one most forcefully nearly fifty years on.

Left to right: Mum, with Ritmeester cigarillo; Nick, somewhat subdued; an unidentified young female person wearing the oversized spectacles (Amanda insists that this widget is not her); Simon “Soprano”; Joey, and Uncle Colin, wearing the traditional headgear of an Australian legal practitioner.

The facing wall was newly papered with posters, handbills, trunk and wine-bottle labels, cancelled tickets, maps, and other ephemera patiently accumulated by Mum and Dad in the northern spring and summer of 1961 on their extended tour of Europe.

The large bottle in the foreground is a reference not so much to obstemiousness or moderate consumption, but rather to the fact that Rémy Martin (now Rémy Cointreau) were a loyal and longstanding client of Mallesons, and their proprietors, M. and Mme. André Hériard Dubreuil, old and generous family friends. I gather Mme. Hériard is still alive.

According to Uncle Colin’s engaging memoir (privately published), in the 1960s M. Hériard, our grandfather, Tom Compson Trumble, and Edwin Peatt, managing director of Nathan and Wyeth, who were agents in Australia for Rémy Martin, found and purchased land suitable for planting a vineyard at Avoca in Victoria. At first it was called Château Rémy, but for reasons that are not entirely clear to me the name was later changed to “Blue Pyrenees Estate.”
Although the original plan was to produce brandy, in due course the grapes yielded too little sugar for that so champagne and other wines resulted. The Hériards evidently loved the place, but eventually sold it after Uncle Colin retired. It is still there. So is Metung, but the bottle must have gone out with the other empties.

How lucky we were to grow up on those happy, hilarious, television-free summer holidays at Metung. True, the bottle of T.C.P. antiseptic (slightly to the right) is a reminder of splinters, stubbed toes, barnacle cuts from the jetty, and minor sailing accidents but fortunately nobody seems ever to have been seriously injured; never to my knowledge bitten by a snake or poisonous spider, and the only local indigenous wildlife I recall are possums, kookaburras, and a lone echidna which put in an appearance in about 1976.

The blue plastic sugar container with white lid continues to provide excellent service. I seem to recall the mixmaster leaning against the wall on the far left went back and forth with us from Melbourne, but I cannot imagine what Mum used it for (apart from mining the annual Christmas pudding). It sits on a superior kind of green Coolgardie safe in which butter and other perishables lived.

By the time I came along the shapely, antediluvian fridge was around the corner off to the right, right next to the loo, but at this date it may have lived in the detached laundry, along with the old washing machine and mangle.

Dad got most of the doors and windows from junk sales, and built the rest of the house with his own hands. The old boatshed predated it, and was then still used for storing boats.
Posted by Angus Trumble at 5:57 AM