A Pleasing Form; a firm, yet cautious Mind 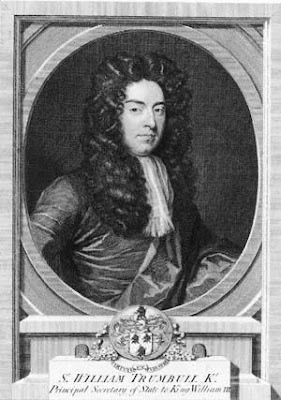 My antiquarian brother Hamish has this day alerted me to a stunning fact of which I was previously unaware, namely that our kinsman Sir William Trumbull, D.C.L., was the subject of a charming epitaph by an ambitious young literary friend and neighbor, none other than Alexander Pope. In fact, Pope dedicated “Spring, the First Pastoral, or Damon” to Sir William, and by way of explanation the accompanying footnote in the Poetical Works sheds some valuable rays of light:

Our author’s friendship with this gentleman [Trumbull] commenced at very unequal years; he [Pope] was under sixteen, but Sir William above sixty [hmmm] and had lately resigned his employment of Secretary of State to King William [III]. Sir William Trumball [sic] whom Macaulay (chap. xxi) characterizes as “a learned civilian and an experienced diplomatist, of moderate opinions and of temper cautious to timidity” was appointed Secretary of State in 1691 and resigned in 1697 to make way for a more zealous partisan. He died at his native place of East Hamstead near Binfield, and Pope honoured his memory by an epitaph. Trumball was the first to recognize the merits of the Essay on Criticism, and to induce its author to publish it; he also eulogized the Rape of the Lock and encouraged the translation of the Iliad. Of Trumball it is related that being in 1687 appointed ambassador to the Ottoman Porte, he performed the journey on foot, thus outdoing by anticipation the German poet’s Promenade to Syracuse [Spaziergang nach Syrakus by Johann Gottfried Seume].

Somewhat expediently Pope borrowed the first six lines of Sir William’s epitaph from another epitaph he wrote for John, first Baron Caryll of Durford (1625-1711), “afterwards Secretary of State to the exiled James II; the remainder of the same epitaph on Caryll being inserted in the Epistle to Jervas— Athenaeum, July 15, 1854.” One’s confidence in the poet’s wholehearted sincerity in respect of his old Trumble friend and patron is therefore slightly shaken, but, as brother Hamish rightly puts it: “Waste not want not.”

On Sir William Trumbal
One of the Principal Secretaries of State to King William III, who having resigned his Place, died in his Retirement at Easthamsted in Berkshire, 1716.

A PLEASING Form; a firm, yet cautious Mind;
Sincere, tho’ prudent; constant, yet resign’d:
Honour unchang’d, a Principle profest,
Fix’d to one side, but mod’rate to the rest:
An honest Courtier, yet a Patriot too;
Just to his Prince, and to his Country true:
Fill’d with the Sense of Age, the First of Youth,
A Scorn of wrangling, yet a zeal for Truth;
A gen’rous Faith, from superstition free;
A love to Peace, and hate of Tyranny;
Such this Man was; who now, from earth remov’d,
At length enjoys that liberty he lov’d.

Sir William evidently bore the principal characteristics of a Trumble, indeed most minor Trumblisms are here present also, and reading this epitaph we are struck by how closely, how completely it might encapsulate our late and beloved father. It really could be him.
Posted by Angus Trumble at 12:27 PM