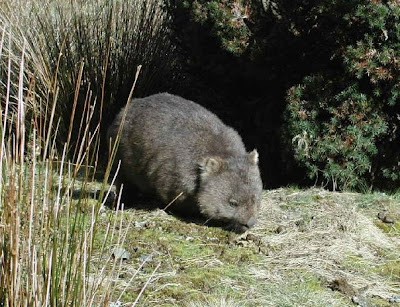 Australian gazetteers offer up dozens of topographical features that carry the name of the common wombat (Vombatus ursinus). There is the town called Wombat, the so-called Wombat Pinch, and the all of which are quite close to . There is (2,621 ft.), between Euroa and Strathbogie, and the Wombat Spur in the Great Dividing Range, both in .

Wombat Hill is in the Parish of Wombat, not far from the near Daylesford, which before 1854 was itself called Wombat.

There is Wombat Point on the north eastern coast of .

Five Wombat Creeks flow in Victoria, three in New South Wales, and one in Tasmania, while South Australia has a Wombat Dam, a Wombat Homestead, and places called Wombat Tank, Wombat Flat, and Wombat Wallow.

While nineteenth-century settlers found plentiful opportunities to exploit the name and distinctive character of the dependable wombat, twentieth-century paid far more attention to the kangaroo – which is better for airlines, and more in keeping with the general mood of a society increasingly enthralled with the idea of velocity.

From about 1803, a steady trickle of live wombats reached . We know there was a wombat among the birds and animals that were delivered to the menagerie of the Empress Joséphine Bonaparte at Malmaison, near . So from first decade of the nineteenth century the wombat was, though not particularly familiar, at least observable in .

An early wombat owner was the naturalist Everard Home, whose paper on the subject, “An Account of Some Peculiarities in the Anatomical Structure of the Wombat,” appeared in March 1809 in the Journal of Natural Philosophy, Chemistry and the Arts.

Hume’s wombat, a male, was in fact caught by George Bass, probably on , where we know Bass and his companions shot several other specimens.

Once provoked, this particular wombat put up a splendid struggle, tearing strips off Bass’s coat sleeves and making loud “whizzing” noises. Evidently he took ages to calm down. Bass kept him alive, evidently looked after him well, and sent him to . There, in , he lived in what Home described as “a domesticated state for two years.” The following description is no less charming today than it must have struck English scientific readers nearly two hundred years ago. The wombat

burrowed in the ground whenever it had an opportunity, and covered itself in the earth with surprising quickness. It was quiet during the day, but constantly in motion in the night: was very sensible to cold; ate all kinds of vegetables; but was particularly fond of new hay, which it ate stalk by stalk, taking it into its mouth like a beaver, by small bits at a time. It was not wanting in intelligence, and appeared attached to those to whom it was accustomed, and who were kind to it. When it saw them, it would put up its forepaws on the knee, and when taken up would sleep in the lap. It allowed children to pull and carry it about, and when it bit them did not appear to do it in anger or with violence.