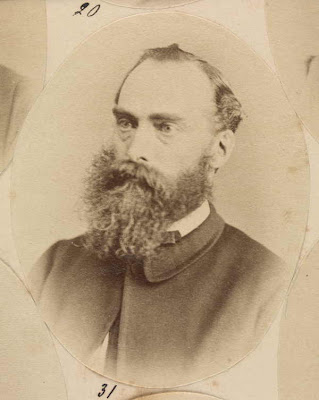 With his brother Thomas Cornelius, my Irish great-great-grandfather William Trumble (1828–1908) emigrated to Australia from Ballymote, Co. , in 1841, aged fourteen.

The family also had connections to the little town of Castlerock, near Lough Foyle in Co. Londonderry, Northern Ireland.

Their father, John Trumble, was evidently a freeholder, and their mother’s name was Ann (née Knott).

John Trumble survives in the land records for two parishes in the neighborhood of Ballymote, Co. .

It seems he paid a church tithe or tax for arable and bottom land, and what is unsentimentally described as “reclaimed bog” at Feenaghroe in the parish of Toomour, to the tune of £1/10/10½.

John Trumble leased from a Mr. Parke a property at Shancarriglen or Oldrock in Cloonoghil parish, which was presumably where he and his wife lived, and raised their family. This was in 1834 valued for taxation purposes at £30.

In turn John Trumble seems to have let numerous small holdings, viz. 37 acres to Mary Feely, 22 to Michael Coughlan, 14 to Michael McDonough, 31 to Messrs. Gaffney, Gray, and McGettrick, 7 to Michael Dodd, and smaller, actually tiny parcels and plots of arable land to various others.

Mrs. Trumble’s Knott relations lived nearby, in much the same way, though they were better off: James Knott, Esq., of Battlefield in the parish of Toomour, probably Mrs. Trumble’s father or brother, held more than 200 acres, which were in 1858 valued at £133.

My eccentric cousin Robert Trumble, whose batty The Trumble Family in Australia was published privately in Melbourne in 1972 (my signed copy is no. 22 of 150), has shown that the Irish Trumbles were transplanted from Scotland in the seventeenth century, and their name was much prone to corruption.

Variants include Trimble, Tremble, Trumbull, Turnbull, Turnebull, Turnebu, etc., but satisfactorily there is in Joseph Bain’s Calendar of Documents Relating to Preserved in Her Majesty’s Public Record Office, (: H.M. General Register House, 1881, Vol. 2: A.D. 1272–1307) a dated reference to one Ralph de Trumble (1295–96), so Robert believes ours to be the correct, or canonical spelling.

In any event, in 1841 William and Thomas Trumble disembarked in Port Adelaide, South Australia, and found their way overland to .


The brothers must have arrived in the vicinity of ) well ahead of the first gold rushes in 1851, because one of them (above) made it into this 1853 composite silver albumen group portrait photograph by “Bent” of 100 members of the Society of Old Bendigonians, which is today in the collection of the State Library of Victoria.

Most unfortunately it is not entirely clear which of the two it is, or whether indeed it was, in fact, a third, hitherto unidentified brother, but I fancy the hint of a resemblance, especially in the shape of the head, to my brother Simon, so I should think William’s claim is at least respectable.

According to the library’s catalog record this is “H. Trumble,” but it cannot possibly be Uncle Hugh or Uncle Harry, so I suspect that it is either a misreading or erroneous transcription of “W. Trumble,” which is more likely than a misreading of “T. Trumble.” Or maybe there really was an H. Trumble Old Bendigonian that we never knew about, although I doubt if this mysterious person would have escaped the notice of Cousin Robert Trumble, whose researches were thorough, though admittedly much restricted to the game of cricket.

Anyhow, at this date the Trumble in this photograph practiced around Sandhurst as an apothecary, and, if it was William, then to some extent his later work in hospital administration makes at least a little sense.

Evidently they did rather less well at mining for gold than supplying medicines to the neighborhood of before the Gold Rush, but William must have done well enough to justify describing himself on his marriage certificate in 1862 as “quartz miner.” 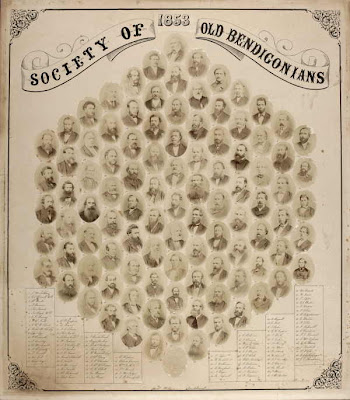 William Trumble eventually entered the Victorian government service, rising to the dubious position of superintendent of the Willsmere Hospital, better and perhaps more accurately known as the Kew Lunatic Asylum.

The Asylum was built between 1864 and 1872 to the design of architects in the Victorian Public Works Department – a gloomy, cut-price riff on Second Empire architectural opulence, initially standing in stark contrast to its function, but with each passing decade converging eerily with it.

There is some comfort in the fact that my ancestor was put in charge of it, and not admitted. The doors were thrown open to in-patients in 1871. 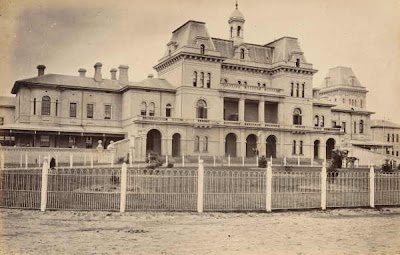 Thomas Cornelius Trumble, meanwhile, decided to continue on to , and was never heard of again. I am told his descendants have prospered, to the extent that this is possible.

On December 3, 1862, at St. Stephen’s Church in , William Trumble married Elizabeth (1829–1908), the daughter of a Scottish merchant, Hugh Clark of Edinburgh, and his wife Catherine (née Stuart).

Whether or not this entitles Trumble descendants to assert any claim to the thrones of and , I cannot say.

The children of William and Elizabeth Trumble were (1) my great-grandfather John William Trumble (1863–1944) (q.v.), who played Test cricket, though not nearly so famously as his brother Hugh, and later practiced as a country solicitor at Nhill in the Wimmera. The practice was still going in 1988, by which time it was known as Trumble & Palmer.

Then followed (2) Henry, known as Uncle Harry (1865–1906), the wicket-keeper of the family, who cultivated sugar in Queensland, apparently bought an island, and was rumored to have been murdered by New Caledonian savages. As a direct consequence of this outrage H.M.S. Psyche was dispatched on a punitive expedition.

By 1872 William had moved from Bendigo to Melbourne, where he married, then to Ararat, in Central Victoria, where Thomas was born, while the older children were all born in Sackville Street, East Collingwood (Melbourne), which was presumably handy for the Kew Asylum, though not as handy as, say, Kew.

Great-great-grandfather William Trumble died at home in Waterloo Street, Camberwell, in 1908, and was given a colossal funeral. According to Uncle John Compson Trumble, “People came from everywhere.”