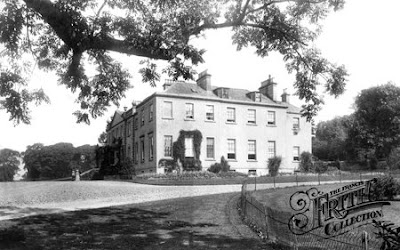 I possess a photocopy of an old off-print of a lengthy article in Burke’s Colonial Gentry entitled “Pearson of Kippenross,” that was carefully inscribed by our great-grandmother, “E[mily]. S[ophie]. Pearson, Kilmany Park, at ‘Craigends,’ Ayrshire, 1912,” shortly after she and her family arrived for an extended stay in Britain before World War I.

According to the preamble, “The old Scottish family of Person of Lochlands, Pierson of the barony of Balmadies, Forfarshire, and Pearson of the barony of Kippenross, Dunblane, Perthshire, of which the Hon. William Pearson [my great-grandfather] is head, appears under various spellings, in some of the earliest official records of .
This family is described as then “ancient,” in 1684, by John Ochterlony of The Guynd, in his Account of the Shire of Forfar” [a manuscript in the Advocates’ Library in Edinburgh that was eventually published by the antiquarian James Maidment in his The Spottiswoode Miscellany: A Collection of Original Papers and Tracts, Illustrative Chiefly of the Civil and Ecclesiastical History of Scotland (Edinburgh: Printed for the Spottiswoode Society, 1844), Vol. I, pp. 311-350].

The unbroken descent of Pearsons appears to commence with Thomas Pierson, who died before 1524, and his first and, unfortunately, anonymous wife.
Of Thomas Pierson’s five sons, John the eldest, was a monk; Thomas, the third, became the ancestor of the Pearsons of Clow, and of Lady Paton, wife of the artist Sir J. Noel Paton, specifically a painter of fairy subject-matter; David, the fourth, obtained in 1576 the monastery charter of Nether Baith, thenceforth known as Peirson’s Baith; and Adam, the youngest, inherited abbey lands of Kepty, Smiddie Croft, and Lamblaw Croft, including Lochlands, a portion of Cairny.

It is the second son of Thomas Peirson’s sketchy first marriage, however, who concerns us here. His name was Walter Peirson. Having witnessed a charter by Alesone Charteris, relict of one “Fotheringham of Powrie,” which granted the lands of Forgandenny to one Cristopher Seton of Meldrum—an arrangement confirmed by Mary, Queen of Scots, on April 30, 1556—Walter Peirson expediently married Seton’s daughter, Isobel, a rare instance of shrewd financial management in the Pearson line.

Walter and Isobel Peirson had four sons and two daughters: (1) James, who married Elizabeth, daughter of Carnegy of that ilk; (2) John, who married another daughter, Margaret, of the same Carnegy of that ilk; (3) Alexander, of whom more presently; (4) Thomas, whose doughty child and heiress, Elspet, in 1645 subscribed “600 merks” to the defence of Dundee by Major Mungo Murray against the Marquis of Montrose.

The third son of Walter and Isobel Peirson, Alexander Peirson, represented in the Convention of Estates at Holyrood House, in 1602, and in the Scottish Parliament of 1608, having been since 1586 a merchant burgess of . From his first marriage to Bessie, the daughter of one Jhone Eistoun, he had five sons and two daughters: (1) Alexander, a brilliant advocate, who in 1634 distinguished himself in the defense of Lord Balmerino, and in 1649 rose to the bench as Lord Southall; (2) Adam, who succeeded his father as merchant burgess of Edinburgh; (3) James, of whom more presently; (4) John, who in 1646 served on the Committee of War, and in 1655 became Commissioner for the Shire of Edinburgh; (5) Thomas, a “bachelor”; (6) Elspeth, who married Thomas Cleghorn, a goldsmith, and (7) Margaret, who married Edward Edger of Wedderly, Co. Berwick.

The third of these—and a curious pattern of descent from second or third son to second or third son is here beginning to emerge, and lasted as far as our great-grandfather, William Pearson, who was also a third son, as is my elder brother Hamish—was James Pearson, of Kippenross in Perthshire, who was born in 1594; took his M.A. from Edinburgh University in 1615, was ordained in the Church of Scotland, and was eventually appointed by King James to be Dean of Dunblane Cathedral. 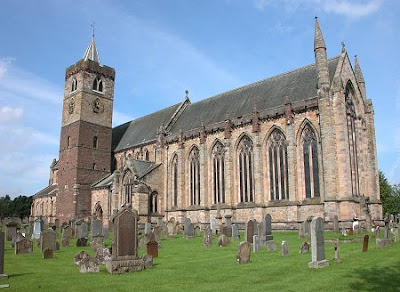 Dean Pearson used this benefice extremely effectively (after the example of his shrewd grandfather) to enrich himself and his family, before coming under the notice of the authorities in 1649, who forced him by Act of Parliament to lend his money to the public purse. Nevertheless Dean Pearson survived more or less intact until he died in 1658.

Dean Pearson, James, married Jean, the second daughter of David Drummond of Innermay, and had three sons and a daughter, viz.: (1) James, the eldest son and namesake, who was born in 1637, was in 1678 appointed one of the Commissioners of Supply for Perthshire, having in 1661 married Helline, daughter of Sir John Rollo of , who was, in turn, the second son of the first Lord Rollo; (2) David, a bachelor; (3) Alexander, another bachelor, and (4) Jean, who married into the family of James Belshes of Tofts.

James and Helline (Helen) Pearson had an enormous family of two sons and seven daughters who survived infancy: (1) James, of whom a little more presently; (2) John Pearson of Kippenross, our ancestor; (3) Janet, who in 1691 injudiciously married Patrick Graeme of Inchbraikie, soon after he was outlawed for having fought and won a fatal duel with the Master of Rollo; (4) Isabelle, a spinster; (5) Elizabeth, who married Walter Buchanan of Wester Spittlehau; (6) Annabella, another spinster; (7) Anna (the name seems unoriginal, poor girl), who evidently remained yet another spinster.
Now, John Pearson, the second son of James and Helen Pearson, was born in 1667, and eventually married Jean, daughter of the first Sir Patrick Threipland, baronet, a noted Royalist during the Argyll Rebellion of 1685, and Lady Threipland, whose first husband, Linton of Pittendreich, was a victim with John Pearson’s older bachelor brother, James Pearson, of what is remembered as “Sir Ewen Cameron of Lochiell’s very sad and unwarrantable Mistakes.”

According to Burke, this surviving John Pearson and his wife Jean were wise enough to keep their heads down.
John Pearson “became noted throughout his part of for his gigantic size, and for his hospitality and good-fellowship according to the customs of the day. They had two sons and two daughters, of whom the eldest son died young, and the second son, Hugh Pearson, inherited Kippenross, as well as several useful legacies from his spinster aunts.

Hugh Pearson of Kippenross took the Grand Tour in the late 1730s, and on a visit to the somehow thought that the evergreen oak trees in the vicinity were rather similar in shape and as large as the Kippenross Tree, a huge sycamore, which makes you wonder how much he really benefited from the experience.

Upon returning to , Hugh Pearson took great interest in the improvement of his property, and in 1742 laid out the Beech Walk, along the banks of Allen Water. He married Agnes, the daughter and co-heir of William Gibb, a surgeon of .

Their second and youngest son, William Pearson of Kippenross, who was born on January 27, 1750, married Jane, the only daughter of Sir James Campbell of Aberuchill and Kilbride, fourth baronet.

He actually lost the freehold of Kippenross to one John Stirling of Kippendavie “at dice or cards,” so recalled Aunt Anne, “on the night of the worst storm in years, which was nothing compared with the one he encountered when he got home, and told Jane wot ’e dun.”

William and Jane Pearson are fortunate to have qualified for inclusion in our select club of sixty-four, mercifully (as far as I know) unrelated great-great-great-great grandparents.

The rest of this curious story is told here.
Posted by Angus Trumble at 1:35 PM