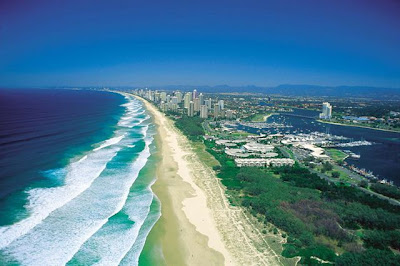 For several successive September school holidays in the mid- to late 1960s, Mum and Dad took the whole family up to Surfers Paradise on the Gold Coast in Queensland, about an hour’s drive south-east of Brisbane. It was a three day journey by car.

My earliest recollection of Surfers Paradise is of sitting in a high-chair in the kitchen at the back of a pretty little clapboard Queenslander in a leafy street, a little way from the ocean beach, much like parts of , today. Mum is telling to me eat up my chopped tomato, and I am not cooperating.

Later on we stayed in a cheap blocks of flats right on the ocean front, in the midst of what was rapidly turning into a booming tourist strip, dotted with high-rise developments.

One year, some crisis arose in the office that prevented Dad from leaving Melbourne the next day as originally planned, and Mum had no choice but to drive the whole way, in our large station wagon, which was crammed with provisions, teenaged children, teenaged children’s friends, and one six year-old, me.

I cannot now recall whether any or all of these disasters occurred on that same journey, but I do remember leaving Denham Place well before dawn, picking up Philip Maxwell from Dr. and Mrs. Maxwell’s house on the corner of Russell Street and Hopetoun Road; being waved off by Joan Maxwell, who was wearing a sensible flannel nightie and dressing-gown, and driving all the way to Albury. There we spent the first night in a motel.

The second day we drove the interminable leg to Parkes via Narrandera, West Wyalong, and Forbes, in central .

At Parkes, Mum decided that it would be educational for the boys make a long detour off the to go and see the radio telescope, which was famous because of its essential role in the N.A.S.A. space program, and the moon landings, which had either just occurred or were pending. 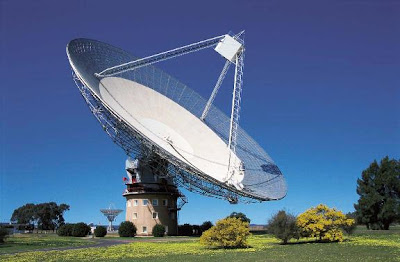 There, in a completely deserted parking lot, in the ne plus ultra of the middle of nowhere, the car key somehow got locked inside the car.

Fortunately, at length it was retrieved by a grudging duty scientist or astronomer, who emerged from a remote outbuilding to do the honors. One sensed that this was not the first time he had been obliged to come to the aid of distressed townies.

Elsewhere, on a remote stretch of highway, a colossal truck traveling in the opposite direction swept past, threw up a decent-sized piece of road metal, and shattered the windscreen, which had to be replaced by a mechanic in Dubbo.

I seem to recall consulting the useful strip maps supplied by the R.A.C.V., which turned your journey, however twisting or circuitous, into a vertical straight line, set out in page-long “sectors.” Even at that early age I found this peculiarly disorienting.

The third day’s drive brought us up through Coonabarabran, Gunnedah, and Tamworth, to Armidale and and thence by way of Grafton and Lismore to within easy reach of “Surfers,” as it is known for short.

I do not know how Mum did it. Nor can I think why she and Dad did not opt for the prettier, easier, safer, admittedly less direct but in every respect more enjoyable coastal route. Perhaps the answer is somehow concealed in the question.

One year Granny joined us at Surfers, but sensibly chose to fly into Coolangatta by T.A.A., or Ansett.

The main purpose of Granny’s holiday was, I think, to stay with her elderly sister-in-law, Aunt Maida, the childless widow of her brother Roy, who lived in some comfort in Toowoomba, west of .

Another time, or maybe it was the same year, Brian and June Harrod, the parents of Hamish’s great school friend Richard, were also holidaying at Surfers, and I remember being thrilled to join Mrs. Harrod on the dance floor at the old El Rancho, an enormous, rambling Tex-Mex-themed restaurant and “night club,” with live music, and an extensive patio overlooking the ocean.

The menu was breathtakingly exotic, and I remember being allowed to order “Chicken Maryland,” which, not knowing any better, then as now, Australians generally pronounce Mary-Land, not Merrilyn like the natives.

June Harrod had an exciting helmet of glossily orange hair, spectacularly big, and “done” in the height of fashion. 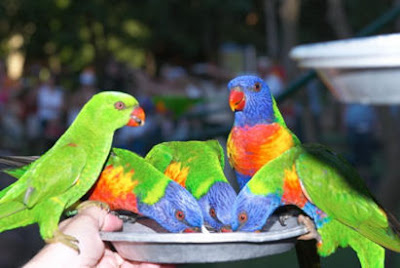 Poor Mum and Dad were brilliant at keeping all their troops entertained, and I remember wonderful visits to the Currumbin Bird Sanctuary, where the brightly-colored feral parrots like to sit on your head, and to the performing dolphins who, I think, then jumped to music in and out of a depressing swimming pool at Southport, or maybe .

My friend Lynne Truss could never tolerate a visit to Surfers Paradise, because it is an apostrophe free zone.

In 1917, a realtor, Arthur Blackwood, marketed the original subdivision of land as the “Surfers’ Paradise Estate,” but the apostrophe seems to have died of natural causes soon afterwards, and now seems as preposterously irrelevant there as snow shoes, or a top hat.

Nick, Simon, Hamish, and their friends must have entertained themselves with surfing, girls, girls, and surfing. Girls also. I seem to recall that they scattered as soon as we arrived, and only reappeared at dinner time. It was the era of candy-colored board-shorts, side-burns, bare feet, and long hair.

In fact, the cloud of teenage hormones hovering over the Trumble flat must have been for Mum and Dad not merely daunting and heady, but completely exhausting, though with admirable sang-froid, somewhat unusual for the period, they managed somehow to go with the flow, and I do not recall a cross word ever being said, or even so much as a note of tension.

On the contrary, peels of full-throated laughter are what still echo in my head forty years on.

We were so lucky.

Posted by Angus Trumble at 6:33 AM