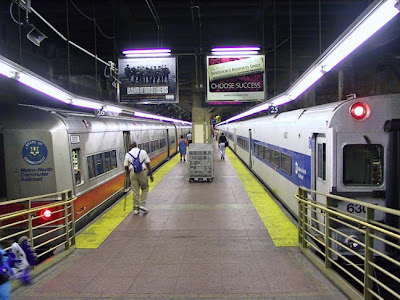 Seven years and four months on, I still get a shock when I look down to where the used to be. Professor Brandt once told me that before it went up, the view of downtown Manhattan from her apartment on was like the prow of a gigantic ship, and, before they started building the new , for a while I suppose it must have looked like that again.

Heading north along early this morning was magical: bright and frigid, so that last evening’s inch of snow has congealed in places into lethal floes of crackling ice.

The was trumpeting its silent metallic fanfare, as usual. What a stately old matron she is! I walked as far as Andrew’s rectory, then took a cab to Grand Central.

The MetroNorth Railroad is always entertaining, despite the hardship. The open carriages are colossally uncomfortable; the seats are far too close together, slippery, dirty, and saggy. Such privacy as is proffered to your average Connecticut commuter consists of reasonably high seat backs, though if you happen to be tall, as I am, you can almost always see the upper half of the other passengers’ faces, if they choose not to slump. There is an element of intrigue to this, as in libraries.

Loud public cell-phone conversations—too much information—have dampened the entertainment value of gradually assembling small but surprisingly elaborate portraits of certain passengers who for various reasons arouse your curiosity. Occasionally, however, one may still play that diverting game.

This morning, for example, a handsome young man—mid-twenties—got on my carriage, hauling a large backpack, and a suitcase with still-fresh “IST” airline luggage tags: , in .

He was wearing a dark green knitted woolly hat; neat spectacles; the suggestion of a youthful five o’clock shadow; a dark red hoodie; and a navy blue pea jacket, which he carefully removed, folded, and stowed aloft. He immediately attended to his fine, blond hair, using the window as a mirror: a charming hint of fastidiousness, if not vanity.

Out of his backpack he took the current issue of the Economist, and an Arabic broadsheet newspaper, which he opened and read in the correct, back-to-front manner, with much absorption, between and —at least that was what he was doing when, at regular intervals, I awoke from my motion-induced coma.

MetroNorth carriage windows are usually so maculated with filth on the outside, especially after a snow storm, that their only practical purpose is to provide many oblique reflections with which discreetly to observe passengers on the inside. In any event, that was when and, in due course how, our earnest young friend with the fine features and the Roman nose caught my eye.

A Yale graduate student perhaps? Should I in fact recognize him? But, no, probably not: He gets off at —the kind of maneuver I can somehow never achieve in similar circumstances without getting hopelessly tied up in knots, or scattering the contents of my pockets on the floor.

Walking down the aisle, the scuffed but sturdy Timberland two-eyelet boat shoes with leather thongs instead of laces give him away: almost certainly rich, or preppy with a twist. Maybe heading back to the family home, somewhere leafy.

But, at the same time, largely in view of this accurate socio-economic data so freely displayed, he is, I imagine, impressively frugal, possibly independent-minded also—why else schlep from Terminal 1 at JFK (Turkish) to Grand Central and then take MetroNorth, and not be collected? No doubt he has learned from bitter experience how ghastly and interminable the so-called “ limo” service can be.

It’s very easy to miscontrue those moments when on a train you repeatedly, maybe inadvertently, meet the other person’s gaze, and earlier I am insisting to myself that he is merely wondering why the middle-aged homosexualist in the far corner is having such a lot of trouble staying awake.

But then, at Stratford, Conn., after the doors have closed, at the top of the steps down into the parking lot, he pauses to retract the handle of his suitcase on wheels, hoicks it off the ground, then looks over his shoulder, and flashes me a coy but winning smile. Not even a shadow of a doubt about it.

Love is quite definitely in the air.

Posted by Angus Trumble at 1:22 PM