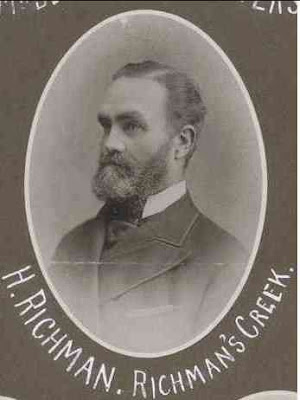 Two more berths in my carefully selected club of thirty-two, thankfully unrelated great-great-great grandparents may now be filled by John Henry Richman and his wife (née ), who, with three young children, Henry John (“Uncle Jim”), Sophia, and Frances, sailed from via Deal on November 20, 1838, aboard the Thomas Harrison (Captain E. M. Smith). They reached Port Adelaide on February 25, 1839, beating the Gooches of Benacre Hall (q.v.) by a little more than a month.

Emily, the future Mrs. George Cornelius Gooch, my great-great grandmother; her sister Olive, the future Lady Fergusson, and a good handful of other supernumerary daughters must all have been born in .

When their only son was born in January 1826, Mr. and Mrs. Richman were living in Lymington on the Solent in Hampshire.

According to Lymington, Being a Familiar Description of Every Thing in the Town and Neighbourhood, that is Likely to Be Useful or Interesting to the Inhabitants, But Especially to Occasional Visitors, by “a Resident” (Lymington: Printed and Published by R. King..., and by Baldwin, Cradock, and Joy, London, 1826, pp. 11 and 147), Mr. J. Richman was Clerk of Petty Sessions of the Peace, presumably also a junior member of the firm of John Richman and Sons, attorneys.

The following notice appeared in the Salisbury and Winchester Journal on Monday, November 2, 1812:

To Masters of Vessels in the Coasting or other Trades.

NOTICE is hereby given,—That the next Meeting of the Trustees of the Charity of Mr. John Clingan, will be held at the George Inn, at Christchurch, in the county of Southampton, on Monday the 16th day of November next, at twelve o’clock, for the purpose of placing out Poor Children as Apprentices; and that, according to the directions of the said Charity, peculiar regard will be had to all those intended for the Sea-Service.—Sea-faring Persons in any employment fitted for taking APPRENTICES, are therefore hereby informed, that a Premium of Ten Pounds will be given with such Apprentices, upon application at the Meeting of the Trustees, at the time and place aforesaid, obtaining the approbation of the Trustees thereto.—Dated this 31st day of October, 1812.

John Henry Richman entered the South Australian government service, and became Assistant Crown Solicitor, and also Clerk of the Bench of Magistrates in .

After working on farms and sheep stations, Uncle Jim Richman (above) took up land near some miles south of Quorn in the Flinders Ranges, a venture presumably subsidized by his parents. and Richman’s Creek were named after, or, more probably, by him.

At some point, the family returned to for a few years for the sake of their childrens’ education.

Jim Richman later left , and purchased generous stretches of sheep country at Lincoln Gap, southwest of Port Augusta, and other spots nearby.

Posted by Angus Trumble at 5:26 AM