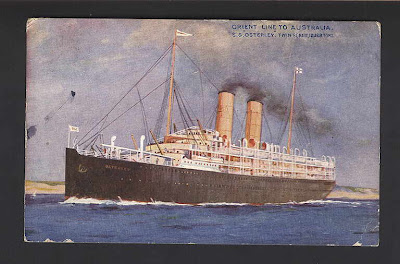 All the year of 1912 we knew we were going to England at the end of it. It was the most wonderful thing to look forward to. Mother and Father went for a trip on the boat at Easter, the apple trip it was called, round Tasmania, picking up cases and cases of fruit. The boat was the Orient liner Osterley.

We traveled three times on her. Mollie [Mungie] used to be quite happy if I would give her a day to day account of what it would be like, as I had never been on a boat—except the Omeo and Dargo to go to Lakes Entrance. It was all make-up on my part, but we both enjoyed it!

I left school in the middle of 1912 to “come out,” put my hair up, and go into long dresses. Phil Fairbairn (Shuter) came out at the same dance, and stayed with us at the Oriental Hotel [in Collins Street]. The dance was given by Dr. and Mrs. Wood (Marjorie Jamieson’s parents) and Dr. and Mrs. Brett for their daughters.

Even in those days we could take partners. Ours were Lex and Keith Borthwick, but we did not dance the whole evening with them only. We had programmes which were filled up satisfactorily, and we were not wall-flowers!

My coming out dress was made at Hicks, Atkinson [& Co., 350 Collins street, Melbourne]. It and one other that was made in Sale were my two for the eleven dances I went to before we went to England. It was very exciting, as the dances were very different to school ones!

I remember driving back to the hotel after one dance, with Mother and Hal Maudsley in a cab, and the sun coming up. After another, when I was stopping with the Charlie Fairbairns, we all ate eggs and bacon in the drawing room, using the grand piano as a table!

What I enjoyed more than anything else were the golf tournaments, especially the one at Kilmany. There were some people from Royal Melbourne stopping with us. I remember [Marion] Mildred Manifold (Rutledge) and two Miss Lemprieres very well. There were big fires at the first tee to warm us up before we started. I think everyone enjoyed it. We went to Traralgon and Bairnsdale.

I remember winning mixed doubles with Uncle Sandy [Gooch] at the latter.