The Gooches of Benacre Hall, near Beccles, Suffolk 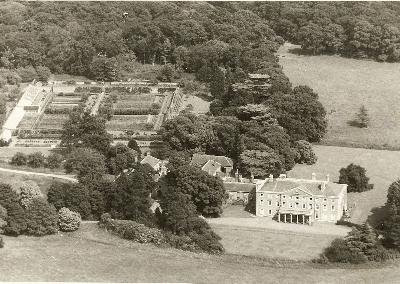 Another two of my thirty-two thankfully unrelated great-great-great grandparents were Charles Henry Gooch, of Benacre Hall, near Beccles in Suffolk (above), who in about 1830 married Georgiana Hayward and in due course emigrated to South Australia.

It is not clear how this Charles Henry Gooch fitted into the enormous family of Sir Thomas Gooch, fourth baronet, who was born in 1745; appointed High Sheriff of Suffolk in 1785, and married on December 23, 1766, Anna Maria (d. September 28, 1814), the daughter and heir of William Hayward, of Weybridge, Surrey.

Presumably he falls into the category of descendants of Sir Thomas and Lady Gooch’s “other issue,” whom Burke presumed died young or unmarried.

In any event, thus far Charles Henry and Georgiana Gooch seem to stake a fairly promising claim to being the earliest of our ancestors to sail to Australia. They departed from Gravesend on November 13, 1838, aboard the Jersey-based, 440-ton, three-masted, copper-sheathed slow-coach D’Auvergne, which was owned by St. Croix & Co. (Master: P. Le Huquet), and did not reach Port Adelaide, South Australia, until March 21, 1839.

Emily Gooch, I think, had only one brother (Sophie Pearson’s “Uncle Jim” Richman) (q.v.), but one of her sisters, Olive, married Sir James Fergusson, G.C.I.E., sixth baronet, sometime Governor of South Australia, New Zealand, and of Bombay, but Lady Fergusson (she was his second) died there of cholera in 1882.

When my great-great grandfather, George Cornelius Gooch married Emily Richman, they settled on a remote property far north of Adelaide, in the Flinders Ranges.
Granny recalled:

Grannie [Emily Gooch] was all alone when mother [Sophie] was born. She knew she would be, as grandfather had to be away. She taught a lubra what to do, and all went well. She was 17! Grandfather [George Cornelius] brought home a sewing machine some years later, and mother could remember all the black faces pressed against the windows, watching the strange devil-devil working.

Great-grandmother Sophie Pearson was the eldest child, and her many Gooch siblings were: (1) Charles Henry Gooch, not to be confused with his uncle and namesake, who married Lucy Alice Brough Abbott in 1886 at Sale in East Gippsland.

On December 10, 1909, this Charles Henry Gooch (“Uncle Charlie”) purchased for £1,670/10, payable by instalments, 1,883 acres of land at Three Springs in Western Australia, between Perth and Geraldton, on the south side of what it is now the Three Springs–Perenjori Road, as well as an option to purchase 1,778 more (adjoining) from the Midland Railway Company, which he soon executed.

Charles Gooch named this hugely profitable wheat property Binderrie. In 1910, he was a member of the Kadathinni Farmers and Progress Association. From 1911 to 1917, Binderrie was managed by his eldest son Sydney C. (“Uncle Sid” ) Gooch, who, with his cousin Uncle Roy, was allowed to join the Duke of York’s shooting party at Kilmany Park.
After spending a few months at Binderrie, in early August 1915, Uncle Charlie Gooch returned home to comfortable retirement at Dutson, near Sale. Nevertheless, clearly he continued to go back and forth to Western Australia to keep an eye on his lucrative wheat interests.

Certainly his dog won the Sheep Dog Trials at the Red Cross Gala Day held in Three Springs on May 23, 1918.

Eric Gooch was born on September 7, 1899, in Sale. On September 9, 1915, Cousin Eric enlisted in the Australian Imperial Force in Melbourne. His mother wrote and signed a short statement giving her full consent for him to enlist, because he was under 21 years of age, in fact only sixteen years and two days old.
He was 5 feet 7 inches tall, had green eyes, brown hair, and a complexion that was described as “fresh.”
After training at the Broadmeadows Camp, on December 9, 1915, he was appointed to the 14th Reinforcements of the 5th Battalion. He embarked from Melbourne aboard H.M.A.T. A32 Themistocles on December 28, 1915, and reached Alexandria in Egypt on February 28, 1916.

After further training, Eric Gooch was appointed to the 48th Battalion on April 2, 1916. He proceeded to France, arriving on June 8, 1916; was promoted Lance Corporal 4495 in the Australian Imperial Force’s 46th Battalion on March 9, 1917; received a severe gunshot wound to his left shoulder on April 11, 1917, and was then evacuated to England for lengthy treatment. He was fortunate not only to survive, but to have his wealthy Pearson cousins close at hand. He was only seventeen.
Discharged from the Australian Imperial Force on January 28, 1918, Eric Gooch received the British War Medal, and the Victory Medal. From January 29, 1918, onwards, the date of his discharge, he received from the A.I.F. a fortnightly pension of 45s. He never married.

To revert to my great-grandmother’s many younger siblings: (2) Uncle George, the second Gooch in that generation, evidently got married, and had one girl, but the William Pearsons lost touch with them after he was killed in a mysterious shooting accident.

(3) John (“Uncle Jack”) Gooch got married, and settled on land near Warrigul.

(4) Frank Gooch married Emily, the daughter of Eyre Lewis Bruce, a Gippsland surveyer who migrated to Victoria from Cork in Ireland in 1854; settled near Sale in East Gippsland ten years later, and surveyed Bruce Road, his only monument, which still skirts the Colquhuon State Forest, commencing at a point on the Princes’ Highway that is roughly half way between Swan Reach and Kalimna West, and leads most of the way north to the neighborhood of Tambo Upper. I am afraid that one day someone will feel it necessary to pave it.

The wife of Eyre Lewis Bruce was Mary (Minnie) Atkinson Whittakers, the daughter of William and Louisa Whittakers, Welsh pioneers of the Monaro district of New South Wales.

(6) After his mother died, Archie Gooch, the baby, aged twelve, went to live with his (much older) eldest sister, our great-grandmother Sophie Pearson, first at Bonegilla, and later at Kilmany Park. He married Norma Macleod, a cousin of Lilias Macleod, and had two sons.

(7) “Aunt Nance” Gooch married Arthur Gellion, and later joined Sophie Pearson in retirement at Metung. Their house was up the hill, tucked behind the village, and Mum recalls going to visit them for tea on the verandah when she was a little girl.

(8) Kate Gooch married William Pearson’s brother, Jack. Their daughter, Joan Pearson, who, despite being born with an extraordinary congenital disability, eventually settled permanently and independently on land at Narre Warren with her first cousin and intimate friend, Mollie Grant Bruce (“Mungie”), who is not to be confused with her mother and namesake, viz:

(9) Mollie Gooch, who married another of the Bruce siblings, Maxwell Bruce, i.e. the brother of Emily and Minnie, a.k.a. Mary Grant Bruce, the famous novelist.

This Mollie, Sophie Pearson’s beloved and by all accounts very beautiful youngest sister, died only a very short while after giving birth to her only child, a daughter, Mollie, known affectionately to the Pearson family as Mungie, who was essentially, maybe even formally, adopted by William and Sophie Pearson, and grew up with Granny, Aunt Mim, Uncle Roy, and the cross-generational Uncle Archie at Bonegilla and then Kilmany Park.

Eventually she settled with her cousin, Joan Pearson, at Narre Warren, and become wholly eminent in Pony Club circles.

Tragically, in the early 1970s, Mungie took her own life. She jumped from a window at the Alfred Hospital in Commercial Road, having been diagnosed with inoperable cancer. Towards the end of his life Uncle John used to comment on this tragedy rather too often for comfort; he seemed to think that Mungie exhibited extraordinary bravery.

Now I only think of poor Joan Pearson, and Granny, who both loved her, and were left behind.

As a young woman, Mungie suffered from some long and tedious illness, and spent much time convalescing with Granny. During that period she created and, indeed, succeeded in selling to commercial radio, a number of highly ridiculous radio plays, based on cuttings from popular magazines and other matter which Mum still preserves at 20, Denham Place.

They must be preserved, because they reflect a rare comic genius, no doubt to some extent related to Mungie’s far more distinguished but rather po-faced aunt, Mary Grant Bruce.

Unlike Mary Grant Bruce, the Mungie radio plays did not in any way eschew, as a matter of principle, the necessary love interest.

(10) Florence Gooch, who was born at sea on the cranky old sailing ship, grew up and married Ted Phillips, and had a son and daughter. Their son, Boyd Phillips, married Nan King, and prospered.
Posted by Angus Trumble at 12:33 PM

Labels: The Gooch family in Australia