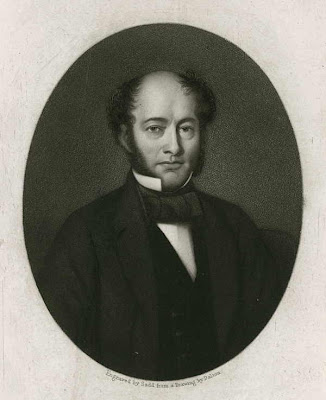 A clearer account of the Loughnan affair is contained in the Maitland Mercury and Hunter River General Advertiser (Saturday, March 13, 1847, p. 4), along with an exact description of the sizzling evidence that was excluded from our great great-grandfather’s trial in Port Phillip for inciting John Loughnan to a breach of the peace.
John Michael Loughnan was born in England on June 11, 1806, and served in the 10th Bengal Cavalry. He was fort adjutant and aide-de-camp to the Governor-General, Lord Auckland, and left the Indian army with the rank of captain. In 1837 Loughnan brought his wife and rapidly multiplying family of seven sons and two daughters to Van Diemen’s Land. By 1842 he had also taken up Lindenow, some 40,000 acres on the Mitchell River, not long after William Pearson abandoned a much smaller portion of that run in favor of Kilmany Park, slightly west of Sale. With his brothers, Loughnan bought into other grazing properties in the district and presumably came into frequent contact with Pearson and his neighbor Lachlan McAlister, though Loughnan’s main residence continued to be Marionburn in Hobart Town. He was a reasonably able painter.
The printed placard mentioned here was apparently affixed to the walls of the Tarraville inn, but copies were probably distributed much farther afield. No doubt the insult was made sharper by the conspicuous omission of Captain Loughnan’s correct military rank. Mr. Justice à Beckett’s curious handling of the case smacks of cronyism, and while there is no evidence that the judge (above) was in any way beholden to Lachlan McAlister or to William Pearson it is possible that à Beckett’s concern was that, in the absence of anyone more palatable, McAlister should not under any circumstances be disqualified from functioning as one of the only magistrates upholding the rule of law in East Gippsland faute de mieux—no matter how imperfectly. In any other context to dismiss Loughnan’s suit on the dubious grounds that there was no proof that William Pearson’s representations were actually authorized by McAlister was at best disingenuous, and at worst wholly fanciful:

Fighting Magistrates.—On the 26th February the case of Loughnan v. M’Alister, came on in the Supreme Court. In this case Mr. M’Alister, who was a magistrate, residing in Gipps Land, had challenged Mr. Loughnan, also residing there, to fight a duel, through Mr. Pearson, who acted as his second, and on Mr. Loughnan refusing, had caused printed placards to be posted up, as follows:- “Notice: I hereby declare Mr. John Loughnan, Tarra Ville, to be a coward, a scoundrel, and a liar. L[achlan]. M’Alister. 24th July, 1846.” On the information of Mr. Loughnan, Mr. M’Alister was now prosecuted criminally for inciting him to a breach of the peace. The case fell through, the Judge [William à Beckett] telling Mr. Pearson he need not answer any questions relative to a letter he had sent Mr. Loughnan desiring him to name a second to confer with him, and the Crown Prosecutor being prepared with no proof that Mr. M’Alister caused this letter to be written, or the printed notices to be posted. The jury, by direction of his Honor, acquitted Mr. M’Alister.—Abridged from the Port Phillip Patriot.

Posted by Angus Trumble at 2:05 PM