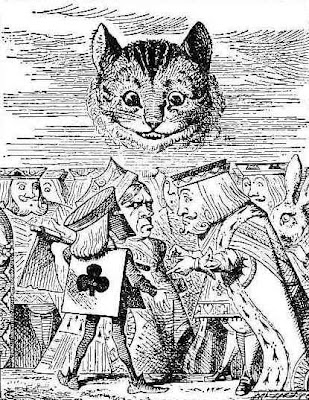 The earliest printed reference to the Cheshire cat’s grin evidently comes in 1792 in the concluding lines of Peter Pindar’s A Pair of Lyric Epistles to Lord Macartney and His Ship:

Yet, if successful, thou wilt be ador’d –
Lo, like a Cheshire cat our Court will grin!
How glad to find as many gems on board,
As will not leave thee room to stick a pin.

Pindar, whose real name was John Wolcott, was referring playfully to the British government’s high expectations of the magnificent, but ultimately unsuccessful diplomatic mission of Lord Macartney to China, which sailed in September 1792 on board the 64-gun Lion. Some years later the essayist Charles Lamb remarked in a letter to Thomas Manning dated February 26, 1808, that his friend the dramatist Thomas Holcroft “grinned like a Cheshire cat.” Interestingly Holcroft was himself responding to a humorous remark about the cat. “Why do cats grin in Cheshire?” Lamb continued. “Because it was once a county palatine and the cats cannot help laughing whenever they think of it, though I see no great joke in it.” An English ‘county palatine’ was a county over which an earl or lord originally had royal privileges with the right of exclusive civil and criminal jurisdiction. Presumably Lamb’s cat laughs at the disjunction between this ‘palatine’ status and modern, more bucolic realities. The phrase also crops up in chapter 24 of William Makepeace Thackeray’s The Newcomes: Memoir of a Most Respectable Family (1855). There it is applied to a character who smiles “with all her might.” I am not quite sure where this leaves us, but I suppose it adds a little glimmer of extra light to the section about Lewis Carroll’s Cheshire cat, and the bizarre grin that makes a walk-on appearance in his Alice’s Adventures in Wonderland. For reasons that I cannot now recall, that excursus needed to be excised from the chapter about deceit in my last book, A Brief History of the Smile. The thing about collateral losses of this kind is that they represent quite a lot of hard work, and I suppose the genius of blogging is that you can dust them off and put them in a place where interested parties can find and use them.
Posted by Angus Trumble at 8:47 AM

Labels: A Brief History of the Smile, The Cheshire cat